There are a few conversations you don’t want to hear your children having in your backyard.

“Ooh! Look at all the baby snakes!”

I was in my kitchen when I heard my three-year-old son and his friend in the backyard squeal in fascination. Our house was new, the yard unfinished and bordered on a canal, which bordered on a field, which apparently bordered on the edges of Snake Heaven. And that Heaven was invading. 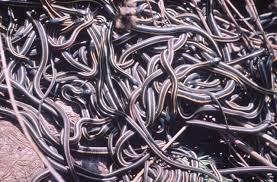 (It’s just a photo–calm down.)

“Those are pythons. I know. My grandpa showed me baby pythons last week,” the friend said with great authority.

I gulped and quickly made my way to the back porch to investigate the terror. Now, I’m fine with snakes—as long as they’re in a zoo, in the wild, and far, far away from my house and my children.

“I don’t know,” my son, who knows nothing of snakes, said. “I’m thinking boa ’stricker.”

Bravely I marched to where the two little boys were crouched and poking with a stick.

Please let there not be rattling! No rattling!

I put on an overly happy face—more for my benefit than for theirs—and said with forced cheeriness, “What do we have here?”

The beamed up at me, stepped away, and—

It was NOT baby snakes.

It was FAR worse.

(I know, I know–you should have seen me convulsing as I sorted through the images looking for this . . .)

Yes, all right—worms terrify me far more than snakes. The massive earthworms they had uncovered were far more disgusting, slimy, and smelly—yes, they smell!—than snakes.

Oh, how I wished for a hole of rattlers right then.

I took a step backwards.

“No,” I said, fighting back the urge to wretch. “Just worms, boys.”

The friend shook his head. “Nope. My grandpa showed me baby snakes just like these last week in his garden. Snakes,” he promised.

“No, those are worms. I know. I had to dissect those in 8th grade.” The most traumatic year of my life. Not as if junior high isn’t bad enough, but let’s throw in a handful of worms and make you cut them up!

And people wonder why teenage girls are so moody.

I backed away slowly, advising the little boys to leave the snake/worms alone and come in for a popsicle (popsicles are the end-all, be-all of distraction and reward).

Back in the kitchen I tried to fight down the urge to throw up and tried not to think about the many dried up worms that must have been on the driveway. It had rained that morning. That means all cement becomes a horror show, with dried up bits that aren’t Chinese noodles. (When I see bowlfuls of those on salad bars, I feel like screaming, “Dried up worms! Everyone, run away! Dried up worms!)

(Not a Chinese noodle, unfortunately.)

The odd thing is, I was more worried about worms—reportedly useful in gardens, but scientists lie all the time—than I was about the possibility of two little boys messing with a snake nursery. My own bias set me up to ignore a real danger. Snakes were seen in our backyard later in the season. Some may have even been dangerous. But I only recoiled when I saw the worms.

Now, sixteen years later, I encountered not-Chinese-noodles on the ground and again found myself doing the ooky tip-toe dance of “Don’t squish them!”

There are far greater hazards in the world, and I wonder, do I spend more time on things that don’t matter, that aren’t real threats, than I do on the things that are?

2 thoughts on ““All our ideas were just as pitifully inaccurate as four year-olds arguing over what kind of baby snake a worm is. “”