So, with a carload of boys I didn’t know, I set off to deliver the group. Soon one very loud, very authoritative kid with unruly hair and far too many freckles announced, “Hey—here’s a riddle. What color is the sky?”

Obedient, and bored, the other boys looked outside—

“HA!” shouted Hairy Freckles, “Got ya! Everyone knows the sky is blue! Suckers . . .” He added that last part with the same disdain I’d heard from his 14-year-old brother, who likely pulled the same trick on Hairy Freckles.

The other boys embarrassedly looked down at their hands. But I glared in the rearview mirror.

“That’s not true,” I said plainly. “That bit—right there? That’s white.”

Hairy Freckles scowled and looked out the window, which he hadn’t done since he’d entered the car. “That’s a cloud!”

A couple of the boys, previously shamed, now hesitantly smiled. 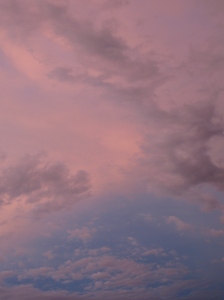 “That doesn’t count!” Hairy Freckles declared and gave me a look that said, If you were my mother, I’d have you put into a home.

“And that, right there,” I pointed out the window, ignoring him, “that gray bit with some red? Also not blue.”

Now all of the boys were smirking at their friend. Nothing’s worse than being put into your place by a know-it-all 25-year-old college student. Who’s female.

“Now, when the sun sets, ooh—definitely not blue,” I continued.

“And what about night?!” another boy finally felt brave enough to contribute. “There’s definitely no blue then!”

The rest of the boys howled as if that was the funniest joke in the world, while Hairy Freckles glared at me through the rearview mirror.

“And then there’s that big bright ball of white,” I went on.

“That’s the sun!” Hairy Freckles pointed out. “And it’s yellow!”

“No, it’s not,” I said easily. “It’s white. They just make you use yellow crayons in school to color it because your paper is already white.”

None of the boys knew what to do with that, even though they peered at it to make sure, then blinked away the fact that they just scorched their retinas.

“Hey, I just got Donkey Kong—” and just like that, the conversation turned. Because hey, these were 11-year-olds.

I’ve always been obsessed with clouds and sunsets, and since then I’ve taken dozens of pictures as evidence that they sky is NOT only blue. Yet I never cease to be amazed at the amount of children’s books, TV shows, movies, and even textbooks that simplify the complexity of the sky to declare, “The sky is blue . . .” when anyone  can tell that it’s much, much more. 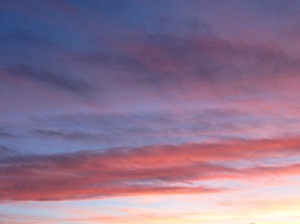 We do this with so many things, just like the middle school textbook my oldest daughter had in science one year that said, “Ocean water is made up of two things—salt, and water.”

“Rubbish!” my 13-year-old had declared, and asked to be homeschooled.

And I wonder, why? Why do we oversimplify the world, even to the point of telling lies about it—if you want to get that direct—to our children and ourselves? Why do we ignore the multiple colors and shapes in the sky and insist that it’s one color, especially when that color is actually just an optical illusion, produced by the sun’s light rays bouncing back blue?

More importantly, what do we miss when we assume we already know the nature of something, and don’t even look out the window to see if our assumptions are correct?

I suspect we miss the true nature of the entire world.