“Why didn’t you do anything to stop him?”

That’s what people frequently asked my father. He immigrated to America in the 1950s, and had a subtle yet clear German accent.  “Why didn’t you stop Hitler when you noticed he was ruining everything? He completely changed Germany, and you did nothing about it!”

My dad would answer, calmly and rationally (even though some of those who asked were hardly calm or rational in their verbal attacks). “First, I was born in 1931, so I wasn’t too influential in the politics of the 1930s and 1940s. Second, what could we have done?”

That question has weighed heavily on my mind these past few years as I’ve watched facets of our government morph into something I don’t recognize as America anymore.

Now, this is NOT an Obama-is-Hitler post. But the questions asked of my father have been clanking around in my mind for some time now. “Why aren’t we doing something?”

I won’t go into details of what worries me in our government (except to whine that the ironically named Affordable Care Act isn’t affordable, doesn’t care, and is completely an act; and that the impending immigration reform via executive order [read: tyrannical mandate] would infuriate my immigrant parents who jumped through all kinds of hoops to come to America legally).

But I won’t be surprised when, in years from now, our children ask the same question: “Why didn’t you stop him when you noticed he was ruining everything? He completely changed America, and you did nothing about it!”

Don’t worry; my baby girl wasn’t traumatized for too long.

Now I freely admit that not everything about Obama is bad. No one is wholly evil (even Darth Vader had a few soft spots).

Personally, we have benefited immensely from the Income Based Repayment program for student loan payments, signed into law by Obama in 2009. Without that, we’d be living in a cardboard box right now, while a huge chunk of our income went to pay off our student loans. I’m grateful for this program and pray that it lasts.

My father, too, was grateful for the Autobahn and Volkswagen, initiatives of Hitler to help the common man. And in many ways, Hitler was a man of morality. He never smoked or drank alcohol, and instituted a “Fast day” where citizens fasted for a meal and were encouraged to give the food they didn’t eat to the poor. Hitler increased education, reduced unemployment, rebuilt Germany’s infrastructure, and—contrary to popular belief and internet memes—relaxed Germany’s gun laws so that more citizens could be armed and even purchase guns at younger ages (the Jews, however, he disarmed, unsurprisingly).

In 2004, my dad was asked to speak to the fourth graders at a local school, and he told them that, “Hitler was a very convincing and inspiring speaker, and he could convert many of his listeners to his ideologies.  . . . Depression, unemployment, and poverty were rampant, and he wanted to turn things around.” And he did.

And that’s when Germans decided he wasn’t such a bad chap . . . until things started to shift.

And that’s when it was too late. Germany was becoming a country unrecognizable to its citizens. Within just twelve years, he changed everything, while Germans stared in disbelief wondering what just happened.

I worry that it’s happening here, too. The Constitution was established to keep our borders safe so that citizens could live their lives as their consciences dictated. But we’ve been drifting away from that for some time now, and considering historically that no republic has lasted intact longer than 200 years, I suppose it’s time for us to implode. As Alexis de Tocqueville wrote, “The American Republic will endure until the day Congress discovers that it can bribe the public with the public’s money.”

I’m definitely no politician, primarily because I feel my heart rate increase, along with my blood pressure, when I read what’s changing in our country. How the Constitution is disregarded. How the Supreme Court overreaches. How states’ wishes and votes are overturned by judges not even in their states. And how the president can do just about anything he wishes through an executive order, while Congress bickers and does nothing.

When Ronald Reagan said, “The scariest sentence in the English language is, ‘I’m from the government, and I’m here to help,’” he was prophetic.

It is the duty of the patriot to protect his country from its government.
~Thomas Paine

My father told the fourth graders: “At Hitler’s rallies the masses shouted, ‘Leader, command; we follow you!’ With this shout, Germans surrendered their reasoning power and forgot to think for themselves. Later we found out that actors with loud voices were interspersed in the crowd, and at the right moments they shouted this cry and the crowd repeated it.”

Are we all just going along with the crowd as well? Because a few well-placed voices are shouting that it’s ok to follow blindly, to let Common Core decide our children’s education, or that the wife of the president can declare how many calories my kids eat at lunch?

I believe there are more instances of the abridgment of the freedom of the people by the gradual and silent encroachment of those in power, than by violent and sudden usurpation.
~President James Madison

We have no excuse for doing nothing about the abridgement of freedoms we’re experiencing. Again, from my dad: “How was it that Hitler had such tight control over the whole nation? The answer lies with the Gestapo, or State Secret Police. Midnight visitors might show up and take that person in ‘protective custody,’ and they wound up in a nearby concentration camp. Smart people knew how to keep silent.”

We’re smart people (perhaps) and we don’t have to keep silent. We don’t have a Gestapo (but we do have an IRS, which Tea Party members would be happy to tell you about).

But we do have social media, we have forums, we have ways to complain and protest—many more than we had in the 1960s when they really knew how to protest—yet nothing’s improving. Political parties squabble uselessly, and we citizens suffer for it. Those who hold religious and moral values are increasingly persecuted for not embracing behaviors we deem against the will of God. And despite our public protests on social media, we’re losing.

If ever time should come, when vain and aspiring men shall possess the highest seats in Government, our country will stand in need of its experienced patriots to prevent its ruin.
~Samuel Adams

So how do we do prevent our country’s ruin? What would Samuel Adams do? Thomas Jefferson? I’m sincerely asking for ideas.

I also ask this since I can’t ask my father, who’s still alive at age 83, but whose mind is gone because of Alzheimer’s. Back when George Bush declared war on Iraq, Dad wrote a letter to the editor of his local newspaper stating his concerns about the action, and also wrote to the White House. He was proud of the response he received from Washington, and that his letter was published in the paper, but was discouraged that we still went to war. Twice.

Repeatedly he told me as I was growing up that we had to speak up when we thought something wasn’t right in our country. “We didn’t have that possibility in Germany, but we do in America.”

He was so proud to be an American citizen. He served in the Army, always voted, wrote many letters to politicians, and had the phone numbers for Oren Hatch’s office and the White House on his phone list. And he called them! 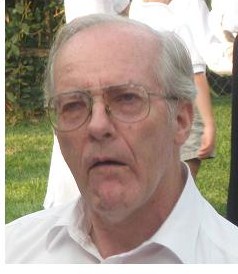 Later, he amended his answer when people asked him why he didn’t do anything about Hitler. “I was a child in WWII, but as an adult I make sure my opinion is heard. I became an American citizen because I love this country and believe in the pursuit of freedom for everyone. What are YOU doing to make sure this country remains free?”

Strange as this sounds, I’m glad Dad’s awareness and memory is impaired. He’d be dismayed to see how we’ve strayed from the Constitution he dutifully studied. He’d be wringing his hands in worry that history was repeating itself, trusting a man who thought much more of himself than he should, and took upon him much more power than was ever intended.

Most of all, I still hear him saying, “Why didn’t you do anything to stop him?”

America will never be destroyed from the outside. If we falter and lose our freedoms, it will be because we destroyed ourselves.
~Abraham Lincoln

People tend to trust whoever sets themselves up as the authorities, but at some point each person needs to look at what’s claimed and test it. Is the sunset really pink, or is it more of an orange? What do you see?

Did the government deserve her trust? They acted as if they already had it, Mahrree thought cynically. As if they could just take it, not earn it. And no one was questioning that, were they? They collect our trust as easily as they collect our taxes. We wanted them to succeed so we trust them blindly. Foolishly. And they’re using that. If people stop arguing, stop thinking, and are just willing to take—to trust—whatever the authority dishes out, they’ll accept just about anything—
~The Forest at the Edge of the World (book 1)