It’s happened yet again. Another horrific event/accident/terrorism incident, and in the comments of the articles and in social media we see blaming of the victim: If only they’d watched their child better, or If only they hadn’t been at that place at that time, or If only they’d been more careful, less stupid.

I’ll admit these thoughts have occasionally hurtled through my brain when I’ve read about the latest tragedies, trying to think frantically how I would have avoided it, how I wouldn’t have let such a horrific thing happen to those I love, or to myself.

As if my placing blame on the victim will somehow ensure I’m never such a victim.

But that’s not how it works.

Everyone—even, and especially, the most innocent—can be a victim.

It’s high time we stop piling inappropriate guilt on to those who desperately need our empathy and help.

Admit it—we’ve all done things that we’ve been eternally relieved had no lasting consequences. Perhaps it’s involved our children. I’ll admit that I’ve accidentally left a child at a store/gas station, had a non-swimming child fall into a pool, and also into a lake. (In my case, this was all the same child, and I know the angels have been running full speed to ensure she’s made it to age 17.)

We’ve all had moments of distraction when driving, and nearly caused—or perhaps did cause—an accident. (I’ve been the victim of that.)

We’ve all had moments of pain and distress or anger where we’ve said something inappropriate, or set off a series of events we regret, perhaps for the rest of our lives. (I won’t go into details of when I did that. Let’s just say there’s a list.)

It’s because we’re human, and while the Savior’s statement of “He that is without sin, let him first cast a stone” was meant to humble the Pharisees who wanted to condemn an adulterous woman, I also see this phrase as a comforting reminder: We all screw up. None of us are without sin.

However, that’s not what scares us the most about tragedies. What scares us to our core is that even those utterly innocent of any wrong-doing can suffer in horrific ways.

What shocks us is that we can be very good people, and still have very bad things happen to us. No matter how much we try to blame and shame that, it doesn’t change the truth: all of us can become a victim.

For example, it’s easy to blame lung cancer patients for their misery. “Smoking causes cancer,” is something we all know. But did you know that 10-15% of all lung cancer occurs in people who have never smoked?

Or take the story of Michelle Williams, a pregnant mom riding in a car with her family, who was struck and killed, along with two of her children and her unborn baby, by a teenaged drunk driver. What did she do wrong to deserve that tragedy? Nothing.

That’s what really terrifies us: becoming an innocent victim.

And that’s where the real test begins: How do we react when we are innocent victims, or when we see others become victims?

This entire life is one long test: of our attitudes, our criticism, our compassion, our hearts. Every day, every moment, every event large or small, is designed to see what kind of person we’re becoming.

Sometimes, the tragedy strikes us personally. That’s the most heart-ripping moments of our lives. How we respond is the real test.

Michelle Williams, the expecting mom who died, left behind a husband and additional children. How Chris Williams responded to the deaths is nothing less than astonishing: He forgave, that very night, the teenager who killed his family. Interestingly, when Chris Williams was a teenager, a boy darted out in front of his car, and was killed by Chris. He knew what it felt like to be on the other side of the tragedy, helping to cause it. He forgave, because he needed and received forgiveness himself.

But more frequently, we’re bystanders to the tragedy, and with the internet, we’re afforded a gory front-row view to everything that happens in the world.

Perhaps here is the bigger challenge: how do we regard the suffering of others, especially when we’re presented with it every day?

It’s easy to grow cynical. “Oh, another shooting. Well, nothing good happens in a bar at 2 am anyway. Big surprise.”

It’s also easy to say, “They deserved that. What did that family think would happen to them, living in Syria?”

And it’s supremely easy to proclaim, “I’d never let my kids wander off, or be snatched out of my firm grip by a measly old alligator.”

Because it’s so much harder to accept that such a fate could hit us too. We like to cling to the idea that we’re special, we’re above pain. Nothing awful should–or would dare–happen to us.

But hardening ourselves to the suffering of others isn’t the answer. Becoming callous and finger-pointers, especially when we point at the victims, doesn’t save us; it condemns us.

I love these words from an ancient king named Benjamin, in 124 BC:

“Succor those that stand in need of your succor . . . Perhaps thou shalt say: The man has brought upon himself this misery; therefore I will stay my hand . . . for his punishments are just—

“But I say unto you, O man, whosoever doeth this the same hath great cause to repent . .  For behold, are we not all beggars? Do we not all depend upon the same Being, even God . . .?”

Why don’t we show a charitable heart and attitude to those who suffer? Perhaps we’re afraid of becoming soft, of feeling too much for them, or of being dragged into their misery.

But I think feeling empathy for those who suffer, and even stepping up to help when we can, does far more for us than remaining callous. When we grieve with the victims, we process our own fears, and become more attuned to those around us. We become more Godlike. The ancient prophet Enoch saw God weeping over the children of the world. “Wherefore should not the heavens weep, seeing these shall suffer?”

I remember when the Sandy Hook elementary shootings occurred in 2012, where 20 children were gunned down. When I went to drop off my daughter to school, I saw many parents giving their kids extra hugs as they left, because none of us know when the last time may be the very last time.

That’s the attitude we need to take in the wake of every tragedy: Rather than blaming the victims (and yes, even in the Sandy Hook shooting I saw plenty of fingers pointing at the innocent) we instead need to cherish who and what we still have.

There are many theories and beliefs as to why bad things happen, but perhaps this is the easiest to grasp: To remind us to never take anything or anyone for granted.

With every scene of horror and terror, we can be reminded, daily, of how precious life is. How everyone deserves our love and attention, every day. How we can’t afford to hold on to pettiness, to self-righteousness, to old anger and wounds, because the purpose of this life isn’t to make us harder.

The purpose of this life is to make us soft. 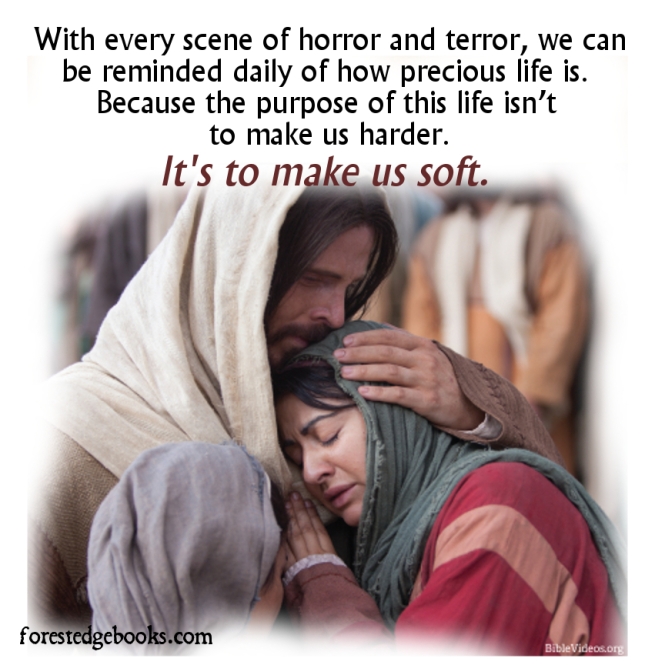 “And you think being soft is a bad thing? Oh, no. Softness is vital. Softness is life. The Creator Himself is soft. No greater compliment could be given to you.”

2 thoughts on “Are you going to let the latest tragedy make you harder, or softer?”