Recently a friend and I were chatting online about a most stupid and aggravating character (Young Pere in “The Soldier in the Middle of the World”). Those of you who are reading it know that Young Pere keeps getting caught up in his own ideas of how things should be. Despite warnings and promptings, he insists on doing things his way, to disastrous ends.

My friend remarked, “I hate to admit that in so many ways, Young Pere mirrors my life.”

I had to agree. Far too often I’ve counseled God–told Him how I expected things to be–instead of taking counsel from Him. That’s how I got so much material for Young Pere—my own arrogant mistakes.

But then I told my friend, “The best part, though, has been writing salvation for him. Bringing in characters who help him, then developing for him an ultimately happy ending. Nothing has been more satisfying!”

I could barely type those words before something big and beautiful bloomed from them: the idea that if I can so readily write a good ending for a character, couldn’t God also take my messed-up storyline and craft a happy ending as well?

I won’t detail my mistakes (it’s not THAT kind of blog) but I’ve made a few whoppers, and we’re still reeling, many years later, from some huge financial errors. So often I’ve decided there isn’t any hope, that this problem which grows yearly will go with me to my grave (the only way we’ll eventually be free from it).

But lately I’ve had this little niggling in the back of my head: What if there is a solution? What if God has seen the disasters caused by my younger arrogance, and has been quietly working on a subplot these past few years that will eventually surface and provide a glorious solution?

Then came to me the thought, “That’s exactly what I do. If you pay attention, eventually you’ll find it.”

In Moses 1:39 He says, “For behold, this is my work and my glory–to bring to pass the immortality and eternal life of man.”

His “glory” is helping us secure a happy ending. Talk about a satisfying project!

I’ve written before that God’s the master plot builder, that through His twists and turns and even deus ex machina, He literally is the God in the Machine, frequently providing solutions and answers and lessons and growth that we never would have sought out for ourselves.

And He even provides miracles.

Little ones. Big ones.

He hasn’t ceased to be a God of miracles.

And maybe, just maybe, He still has a few plot twists and miracles waiting for me. Perhaps even a most epic and glorious ending. Because, honestly, there’s nothing more wonderful than making a happy ending.

And I’m betting He’s got one for you, too.

You look so tired, Young Pere. So weary, my sweet boy. Did you ever have a day of peace in the world?

Then isn’t it time to let go of the world?

Young Pere let the words wash over him, some remote part of him beginning to accept that maybe it wasn’t such a bad idea.

Isn’t it time to try someone else’s ideas for a while? The Creator has a plan for you, Young Pere. It’s been revealed to me, and my sweet boy, it’s wonderful!

He rubbed his face.

Do you trust me, Young Pere? 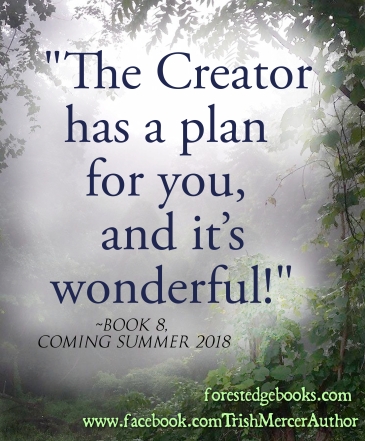 8 thoughts on “Can God, the master plot builder, write you and me a happy ending, even if we’ve messed up the story?”