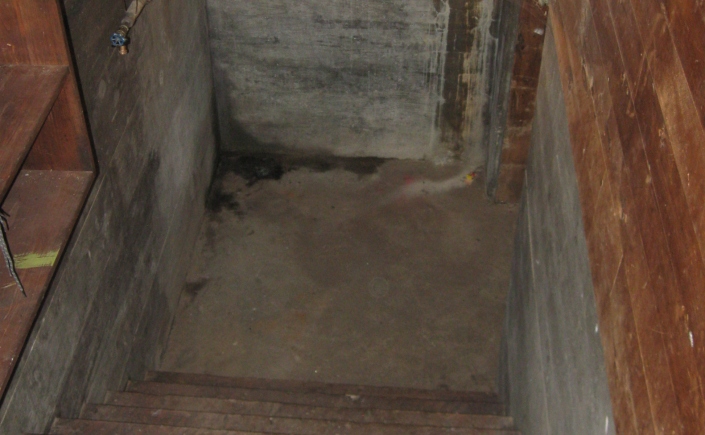 My five-year-old is currently in the dungeon. Well, others might call it a “basement” but with the damp floor and that smell which permeates every inch of the concrete and rock down there, we’re calling it a dungeon.

He’s chosen to be there, because that’s where his dad’s and brothers’ Warhammer 40k figurines are set up. (I call them “hideous plastic things.”)

He’s playing with things that look like this^. I guess nothing else down there is as terrifying.

Here’s the weird part–he’s not afraid to be down there, alone, with the spider webs and damp and creepy windows . . . but he’s terrified to pick up his new 6-week-old kitten.

It’s the cutest little thing in the world, cuddly and purring, but it has those needle-like claws and THOSE freak him out. He’ll pet it, he’ll croon at it, build her shrines out of blankets and pillows when she sleeps, but the moment it comes after him and his bare feet, you’d think a mountain lion had been released because he goes RUNNING FOR THE HILLS! 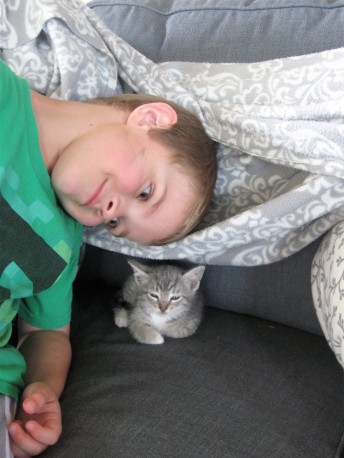 Blanket shrine to worship the cat. And we’re not even in Egypt.

On the other hand, his 13-year-old brother will love and play with the kitten endlessly, but he’s so terrified of the dungeon/basement that he LOCKS the doors going down there.

This poses a problem for the 5-year-old trying to come back upstairs, and freaks out older brother when he hears the door rattling because SOMETHING HAS COME UP FROM THE BASEMENT! 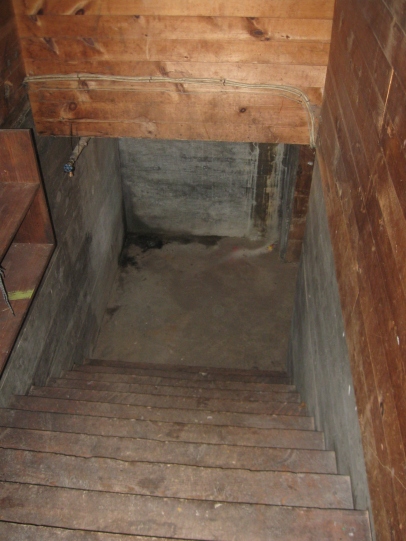 The stairwell to the basement/dungeon/Hades.

Fear is a weird and random thing.

Sometimes it makes us run and slam the door. Other times we charge it, like my 18-year-old daughter armed with the shop vac sucking up every spider web with the extension tube. (The dungeon/basement is next, but only once she stops shivering from her last extraction triumph upstairs.)

Other times we call for help, as with my 5-year-old (the dungeon tolerator) who came from the bathroom to announce he couldn’t brush his teeth because of the “critter” in there. Turned out to be a moth in the sink. Another reason why we got a kitten, who I wanted to name “Moth Killer” as a reminder as to how she’s supposed to earn her keep.

Sometimes we’re quiet about our fears, such me pretending to know how to talk to people–especially strangers–all the while my heart rate is at 120 bpm and I’m praying I don’t pass out before the conversation is over, to my own father who I didn’t know was deathly afraid of snakes until I, as a kid, came up to him with our neighbor’s boa constrictor draped around my neck. I’ve never seen a man go gray faster than my father did, and still live.

It’s strange that what makes some people afraid has no effect on others. Birds, for example, send some people into a panic while others keep them as pets. Same with rats. And chihuahuas.

Everyone hates needles, however. I’ve asked phlebotomists about that every time I’d had blood drawn. One nurse told me, “If I met someone who LIKED having a needle jabbed into a vein, THAT would terrify me.”

What’s the point to this rambling? I’m afraid I don’t know.

“There’s nothing to fear but fear itself.” Be honest. You, like me, hear that phrase that think, “Oh yeah? What about [fill in the blank]?” There are DOZENS of things to fear, and here’s the good part: all of us fear something. All of us are cowards about something.

Openly or quietly, there’s something that worries each of us, which is good to remember. That’s not meant as a challenge to figure out someone’s fear and exploit it, but to comfort us all that we really are all the same.

Once I dropped by the house a 13-year-old when her mom wasn’t home. In a small and terrified voice, she asked me to do her a favor. Worried that I was walking into a home invasion scenario based on her solemnity, I nevertheless agreed. Moments later I felt like Wonder Woman as I went downstairs (a nice downstairs, with carpeting and lights) with tissue in hand to extract a spider that had kept this sweet girl from entering her bedroom for the past hour.

I realized then that maybe different fears exist to let all of us be heroes at one time or another. My husband is my hero whenever a live mouse or a dead animal is involved. (Bonus points to him if it’s a dead mouse he bravely disposes of.) Perhaps that’s why he moved us here, so that after a year of living apart I’d have plenty of reasons to rush into his arms and ask him to be my hero because there may have been another mouse . . .

Which now has may thinking that maybe romance is also a weird and random thing.

When Perrin came home for dinner the tiny cat was still there. It hobbled up to him and began to climb his trousers.
“Get it off!” he yelled, shaking his leg.
Mahrree extracted the kitten from his knee. “Honestly. How can a grown man be so afraid of a tiny kitten?”
“Afraid? That’s what you think I am? Afraid!”
“Yes! Give me another reason why you run in terror from it.”
“I don’t run.”
“Well, you shout!”
“That’s ridiculous!”
“You’re shouting now!”
“So are you! Give it to me.”
Mahrree clutched the kitten to her chest. “What will you do?”
“Prove you wrong,” he beckoned. “Hand it over.”
“Don’t hurt it!”
“I won’t hurt it. Just hand it over.”
Reluctantly, Mahrree gave him the kitten. Perrin held it up to his face. It mewed in a manner that sounded like a whimper of fear.
Perrin stared into its tiny eyes.
It stared back, then looked down at the height at which it was dangling. It flailed in fright, so Perrin cradled it in his other hand, and the thing began to purr.
“Why does it do that?” he asked, bewildered.
Mahrree’s mouth twitched. “Because it likes you. I can’t imagine why, but it does.”
He evaluated the creature.
It didn’t resemble a Thorne—captain or general—in any way. It was just a tiny, helpless animal. With needle-like claws. And it made annoying sounds, although quietly.
Still, those claws were unreasonably sharp, snagging the wool on his uniform.
Still yet again, it was just a baby.
“Hm,” he said eventually. “Fine. It can stay.”

~Book 4, The Falcon in the Barn, Forest at the Edge series

5 thoughts on “Dungeons, spiders, and kittens–what terrifies you?”