(Location: Toledo, Ohio. No sightings of Klinger still, but my M*A*S*H fans family are still hopeful.)

Should you happen to see these three vehicles, that’s us.

I forgot to tell you yesterday that my youngest kids were delighted to find out that fireflies are real, and that they sometimes leave fun glowy spots on your windshield at night. I didn’t have the heart to tell them that meant the fireflies had splatted like all of the other bugs permanently embedded in the glass.

This morning I woke up my husband with the romantic words, “Do you realize our youngest son hasn’t pooped in three days?”

Fortunately 5-year-old did a few hours later in Iowa. Unfortunately it was at a gas station bathroom with only one stall, and while two men waited for their turn to get in, he grunted and groaned while I kept post in front of the door. Occasionally I opened it and asked, “Need any help?” I hope the men waiting heard his loud reply of, “These STINKIES are REALLY HARD to GET OUT!”

Five long, agonizing minutes later, with a line growing to get in there, my youngest finally came out triumphant. “Got them out! They were really hard–”

Sometimes our medium-speed truck gets to pass even slower trucks, and I feel like we’ve accomplished something great, until I realize that it’s the equivalent of winning the 50 yard dash at the geriatrics Olympics.

Here’s another brilliant traveling idea: I went to the dollar store before the trip and bought random items for my younger kids: stickers, coloring books, pipe cleaners, dry erase boards–put them in a bag and gave it to them on the first day.

The bags also work as a catch-all for everything else.

Here’s a BETTER brilliant idea: our friends gave us 12 gifts, two to be opened each day. That’s how we got BB8, and now have puzzles and silly putty and even two cookie sheets to use as little lap tables. Every morning my kids eagerly open two new items.

BEST brilliant idea: fruit-scented stickers. When my 9-year-old opened up the package, it was like a fruit stand exploded in the car. Considering how ripe it’s becoming in there, that’s not a bad thing. I think there’s another package of the scented stickers, and I’m saving that for our last day on Saturday.

Two hampers of dirty clothes can develop a fermenting quality, especially when positioned where the sun can focus its beam on a particular smelly sock.

The traffic outside of Chicago, which delayed us an additional hour, left all of us nostalgic for the wide open nothingness of Wyoming and Nebraska. 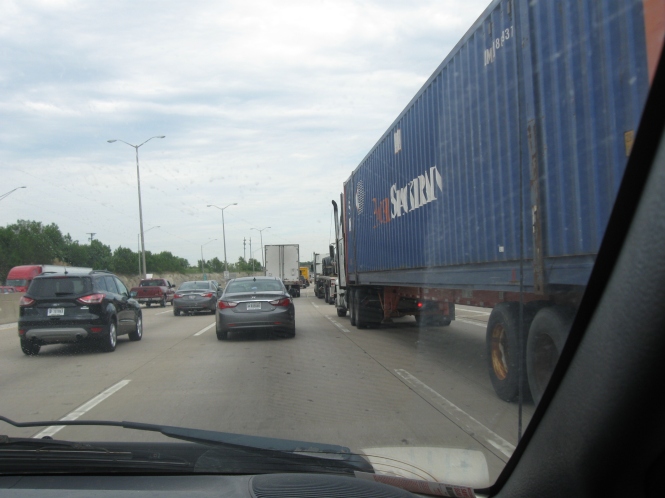 I can’t tell you how much this truck below has had me worried. 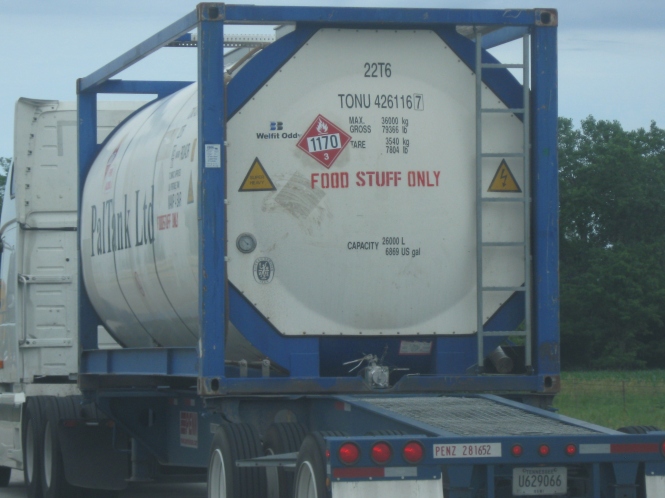 I just don’t understand it: why are there warnings about explosiveness? And an electricity sticker? And WHAT KIND OF FOOD STUFF IS THIS?!

We ate lunch at a Wendy’s in Illinois, in a town near the birthplace of Ronald Reagan. As I squirted tons of ketchup for our seven 4-for-$4 meals, I remembered fondly that Reagan once classified ketchup as a vegetable for school lunches. Ah, those were the days of great school food!

Maybe the Food Stuff Only truck is related?

All through Indiana I never saw Ron Swanson, who I wrote in for president. All in all a disappointing state. The Food Stuff truck above was there, though. I fear there may be a connection. 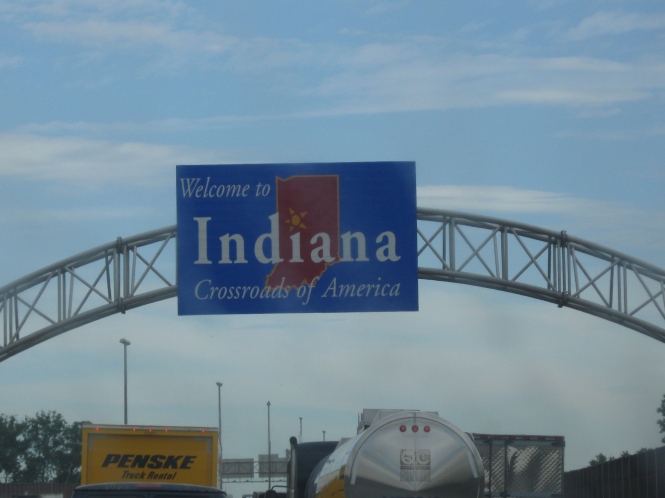 I don’t have a picture of the sign welcoming us to Illinois, because I was asleep while my 18 year-old daughter kindly drove. Later we crossed a river when I was awake and driving, and I radioed my husband, “Is this the Mississippi?”

“No, this is a canal. You slept through the Mississippi River.”

I have no idea where we are sometimes. There are too many states that begin with I and too many rivers that begin with M. We passed one here in Ohio spelled Maumee. Is that pronounced “Mommy”? I really hope so.

There are toll roads in the east, for those of you in the west. Sometimes they even stump/surprise the locals.

My husband had to get out of his truck since the driver in front of him wasn’t getting her ticket. He’s still not sure what the problem was, why she seemed unable to push the button and retrieve her ticket, but we’re newcomers here. We don’t judge. We just get out of the car after five minutes of waiting for no clear reason to see if we can move things along. 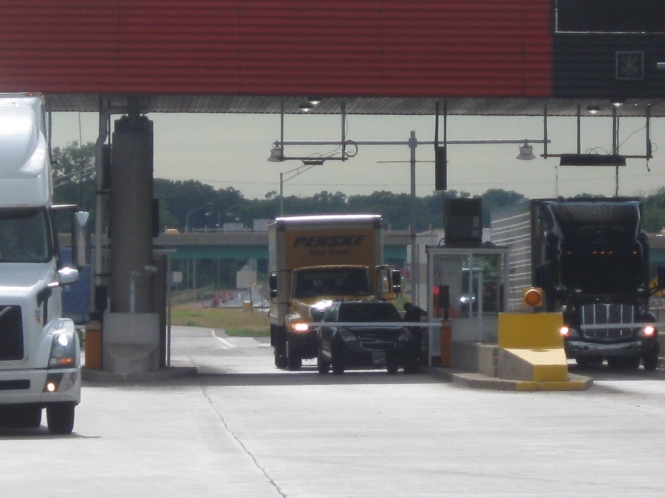 I’m beginning to think that maybe this is karma of some kind, since my son made others wait impatiently for their “turn.”

Especially if those men ate some of that Food Stuffs that’s electrified and potentially explosive.

The midwest is a scary place.

One thought on “Move from Utah to Maine, Day 3–Preschooler poops, too many “I” states, and I’m worried about food stuff”