That’s how I felt two days ago, and wondered if I could.

Allow me to back up a bit. My blog is a little late this week, because I spent a few days in a hospital two hours away assisting my oldest daughter with her second born, and then with her toddler son.

When her little girl was only hours old, and big brother was on his way with his daddy to meet her, I warned my daughter, “He may not yet be two years old, but you’ll be astonished at how old your son will suddenly appear in relation to your newborn. He’ll age years in just moments.”

Because that was the shock I felt when I sat years ago in a hospital room holding my second-born, and my mother brought my oldest, barely two years old, to meet her.

All I could think was, “Who is this giant child?!” It was as if time had taken a enormous step in seven-league boots, and my first baby was now a kid.

As I warned that same “kid,” now 25 years old, I felt that immense step again, striking me with sudden reality that those two tiny girls were now women; the older a graduate student nearly finished with her thesis, just as I was with small children, the other a nursing student hoping to be a newborn nurse in a couple of years.

I wish I could have stretched through time and tapped my younger self on the shoulder—the me who stared at her two little girls and wondered, What have I done? Why did I think I could be a mother to two children?!

I would have said to her, “For just a moment, look here. See what will happen in twenty-four shockingly short years. 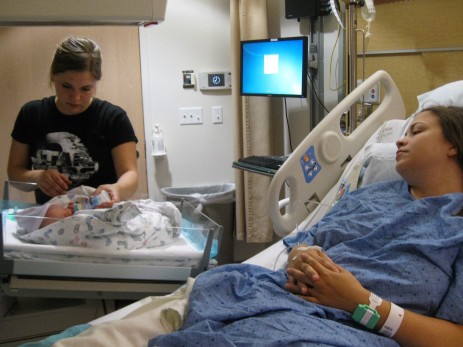 “You’ll have some rough years, difficult months, and terrible days, but also many wonderful ones, and eventually you’ll see this: your two formerly-baby daughters, with your first granddaughter. Hold on to this image for when your hope flags and your confidence wanes. It’ll be good. Eventually, it’ll all be good.”

(I would not have told my younger self, however, that I’d have seven more children. I/she would have dropped in a dead faint,  never to be revived.)

As I watched my daughters and yearned to encourage my younger self, I imagined that I felt a gentle tap on my shoulder. I wondered if it were a distant me, another twenty-four years in the future with too much white hair to pretend it’s only highlights, and with so much experience that I’m sure I’d regard my forty-seven-year-old self as naïve.

I imagined I heard a seventy-one-year-old whisper, “For just a moment, look here. See what’s happened . . .”

I hope that I/she was smiling, as I was this week. I hope that I/she was sending me a message of encouragement, of never giving up. I’m sure there’ll be events that she’ll have witnessed in our future that will be heartbreaking, but others that will be glorious beyond my current imagining. I hope it’s to one of those scenes I/she is wishing to draw my attention, just for a moment.

And I hope that the ninety-five-year-old Trish, witnessing yet another scene of astonishment, is tapping the seventy-one-year-old me on the shoulder, and chuckling and weeping with joy as she does so.

Two hours later an exhausted Mahrree, drenched with sweat and tears, and shocked that so much could change so quickly, stared at the bundle in her arms. Her mother and the midwives were surprised that the baby was so small. Mahrree’s seeming enormity must have been a trick of the eye, they decided, magnified by her slight frame. The baby probably came early.

But she didn’t know what they were talking about; nothing about the newborn she spent the last hour and a half birthing seemed small. ~Book 1, Forest at the Edge of the World