No, I wasn’t having a midlife crisis. 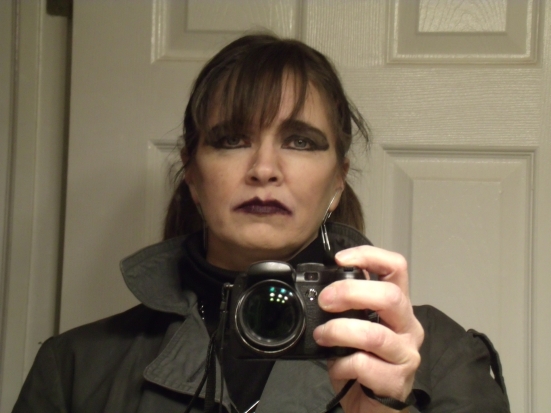 Someone in my church asked me to do this. Really. Ok, not dress exactly like this, but as something “unrecognizable.”

It’s a group activity called “Where’s Waldo,” and ten adults from our church group (called a ward) were asked to dress up and hang out in the local Walmart while groups of our youth, ages 12-18, with their leaders, found us. I was instructed to “really get into the part,” so I dressed up as best as I could, put on make-up I’d never used before, and since I don’t own jewelry, made up my own goth look with paperclips. (I’ve seen safety pins used in piercing, so I wasn’t that far off, right?)

Then I drove to Walmart, and as I pulled in to the parking lot, I laughed out loud. “Wait—I have to WALK into the store like this! Someone’s going to take my picture and put it up on that website that makes fun of Walmart shoppers.” At least no one would know who I was, because I kept my glasses off. (Worked for Clark Kent, too.)

But my 17-year-old daughter had said, while I was preparing for my big acting scene, “You have to change your walk, too. You have a ‘Trish Mercer’ walk that’s kind of distinctive.”

“It’s because my mom used to make me practice walking with books on my head when I was your age. Victorian England, but in 1980s Utah.”

So as I parked my minivan, I practiced my scowl. As I headed into the store I traipsed, slouched, then finally sauntered in, moving like a sophisticated zombie as I got into my part. 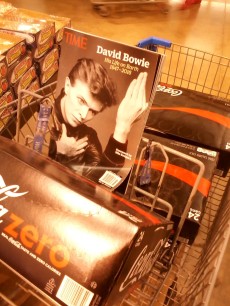 Grabbing a cart, I headed to the back of the store and loaded it up with Coca Cola Zero, because it was in dramatic black boxes, which matched my dramatic black clothing, and my son’s dramatic dark gray trench coat. I also picked up a tribute magazine to David Bowie, then ‘hung out’ in the bakery department to read it.

An adult from my ward was to come by with slips of paper that I’d give to the teams of teens. The kids had to ask me, “Are you a Waldo?” then I’d give them a ticket as proof they’d found me. After they had ten tickets, they were to race back to the church (adult leaders were driving, thank goodness) to see who got their first.

But no one came by, and the stray thought went through my head, What if this was just a set-up to get me to dress up bizarrely and make the rest of the shoppers nervous?

Because by this point, I’d noticed—even without my glasses—that carts would approach, hesitate, then turn or take a circuitous route around me. I felt badly about that, because I’m usually a cheerful shopper, smiling at others and saying “excuse me.”

But not last night. I could feel the darkness of my clothing, the drama of my makeup, and the pinching of the paperclips on my earlobes. Altogether, that meant I wore a perpetual scowl.

I felt terrible that the way I dressed and presented myself made others feel uncomfortable, and maybe even threatened. (But not terrible enough to quit.)

So I tried to ignore everyone else as I thumbed through the tribute to David Bowie, reading about his wild early years which I felt I was living right then. That’s when my cell phone rang. It was my neighbor Elise, also in the store dressed up (whew—wasn’t a set-up) asking if I was there yet. “Yep, hanging out in the bakery department, like I’m supposed to.”

She chuckled. “Well, Cindy’s been looking for you. I’ll send her over again.” A few minutes later Cindy approached me nervously, until her eyes lit up. “Holy cow, that is you! I walked past you twice but didn’t dare talk to you.”

“Sorry,” I said. “Without my glasses, I can’t recognize faces until they’re right in front of me.”

“Very convincing,” she said, handing me the tickets I was supposed to give the teens. “And the Bowie magazine is appropriate.” She took one last look at me, shuddered briefly, and left, and then I waited.

I kept my head down as I read, but I could see feet approaching from different directions as the sweet and innocent youth of my church approached the strange gothy woman in the store. You see, we live in a quiet valley where nothing too exciting ever happens, and where people are pretty much white bread and baked potatoes.

I was black licorice over quinoa. No one knew what to do with me. 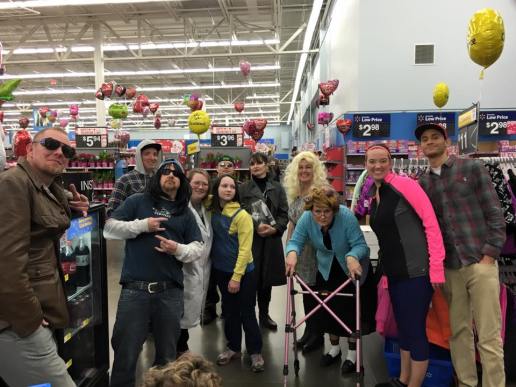 Our collection of “Waldos.” I’m in the middle, looking as disinterested as possible.

As I saw the feet tentatively congregate around my cart, I’d slowly look up, with as much snarling apathy as I could muster. “Like . . . what do you want? I’m reading my Bowie, here. Can’t you tell?”

Then their eyes would bug out, they’d take a step backwards in alarm, and someone would mutter, “Isn’t that Mrs. Mercer?”

I’d roll my eyes dramatically (yes, I practiced that too) and fished in my trench coat pocket for a ticket. “Oh my gosh, look—can we get this over with already? I’m late for a Walking Dead party, you know.”

That’s when they’d start smiling and laughing, but still they stayed back a few feet.

Only for her did I break out of character, because she really did seem disturbed. “Cindy didn’t recognize me either,” I consoled her as her group of five girls hustled off after the next clue.

But for the other groups, I just glared menacingly and went back to flipping pages of my magazine after I handed them their tickets. I think a few of the younger girls were worried by my appearance, and I nearly lost it when a fifteen-year-old boy exclaimed, “Wait—she’s my Sunday School teacher!”

I may have lost all credibility with him.

But all of the effort was worth it when one high school girl said, “Wow—I thought you were a teenager.” I’ll hold on to that one for a long, long time. 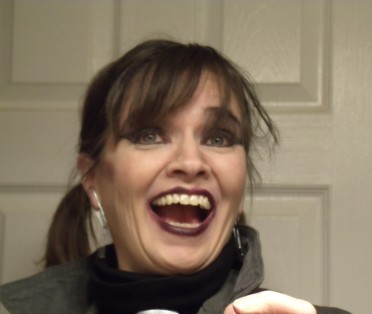 After a while the groups of kids slowed down, and I finished reading, waiting for the call that we were done. At the end of the Bowie magazine, looking at pictures of him in his 60s with his spikey gray hair and dazzling smile, I couldn’t help but think, “He was a great looking senior citizen.” 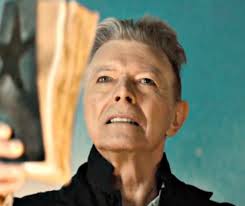 I flipped to the earlier pages and felt as uncomfortable as I had when I first walked into the store, dressed up as something I really wasn’t. Bowie—actually, David Jones—seemed a lot happier and more handsome in his later years. The gray hair suited him.

By the time the call came for “All Waldos to come to the front of the store,” I was relieved. While it had been fun to dress up and freak out the youth of my neighborhood—especially since it wasn’t Halloween—I was anxious to become me again. While I had a small shopping list in my pocket, I couldn’t bring myself to actually buy anything in my present get-up.

As I approached the other Waldos at the front of the store, everyone’s jaws dropped. I have to admit I rather enjoyed the attention—I’ve never been a jaw-dropping woman—but I also was glad it wasn’t going to last more than a few minutes. 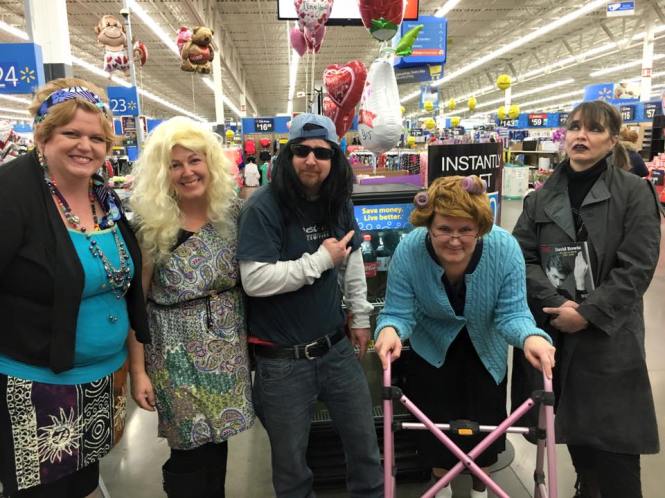 At home, my husband took one look at me and said, “Are you going to need a shower to get all of that off?” I had even gone so far to buy a gray hair touch-up kit to darken my bangs and color my streaks of gray. “You really don’t want to keep using that stuff, do you?” he hinted.

I’m blessed to have a husband with the same attitude of my dad, who once said, “I don’t like a lot of makeup on my wife. I want to be able to recognize her in the morning, not wonder how some stranger got into my bed.”

“No,” I assured my husband, “this it was just for the night, and yes—I need a long shower.”

I took a couple of selfies in the bathroom, because that’s what you’re supposed to do after you spend an hour putting on makeup, and then I tried to wipe it all off. Half a jar of Vaseline later, I took a shower to scrub out the rest of the dyes and gunk. 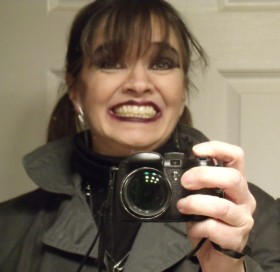 This morning as I looked at myself in the mirror to get ready for the day—gray streaks highlighting my hair again, and pale, dull eyes looking back without any ringing makeup—I knew that was a much better look: the clean, basic, unmade me. Kind of like Bowie in his later years, looking genuinely happy in his rawness. 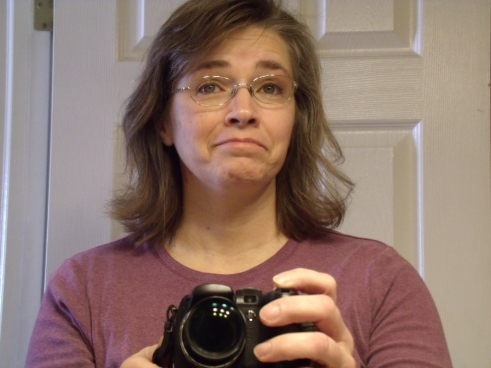 What, you’re supposed to use a cell phone for a selfie? Have you seen my cell phone?

I’ve discovered that with the right makeup and the right clothing, I can look like just about anyone, as skilled make-up artists have demonstrated. Even untalented me turned myself unrecognizable.

I’ve always been averse to lots of makeup, and I think it started way back in the 1980s, when coincidentally I first fell in love with David Bowie’s music.  I also noticed a Robert Plant video where the same makeup and clothing turned a variety of different young women into creamy, rubber copies of each other. It struck me as strange, and as sad.

I never wanted to be an imitation of someone else.

So I’ll go out today as usual, “au natural” (but dressed, so don’t panic). (Ok, I’m wearing a tiny bit of eye shadow and mascara, so people can find my eyes.) No one will mistake me today for something I’m not. Because even if I had an identical twin, no one can copy my look.

(Not that anyone would want to, but that’s a rambling topic for another day.)