Recently I was accused of having “an agenda” in my books.

My very mature response to that was, “Well, DUH!”

Writers ALWAYS write with an agenda—a purpose. It’s WHY we write!

If you ever took a composition course in college, the first chapter in the textbook is all about “Writing With Purpose.” If you hated your English 1010 course, it was because you didn’t care; you didn’t want to write, you just wanted a grade.

But writers? We care. A LOT. That’s why we write. We don’t care about a grade; we care about getting out the word.

So when I was accused of having “an agenda,” I scratched my head a bit and thought, “Well, yeah!”

Suzanne Collins didn’t crank The Hunger Games during a weekend because she was bored.
J.K. Rolling didn’t handwrite the Harry Potter series only because she was out of work and had nothing better to do.
E. L. James didn’t write 50 Shades of Grey because . . . You know, I really don’t want to go there. Scratch that.

My point is, EVERYONE who writes, creates, composes, produces, directs, sings—whatever, EVERYONE has an agenda. Creating art—especially a book series—takes months, but more likely years. We don’t do it because it’s only for fun. We do it because we want to make A STATEMENT.

Subtle or obvious; outrageous or timid; traditional or unconventional. I don’t care what writers or artists may say, we ALL have an agenda behind our work, which is the impetus that shoves us to create. 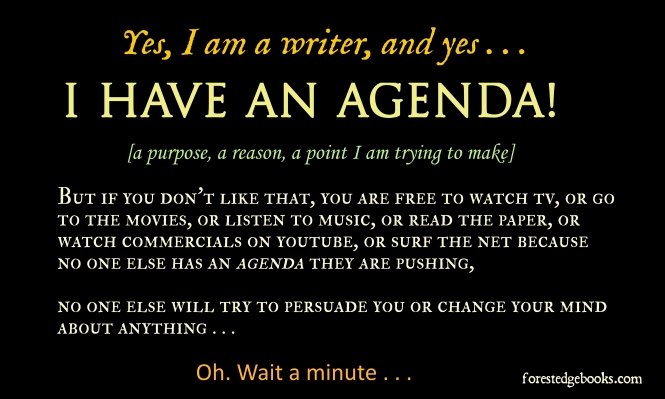 You may not like certain entertainment because that “agenda” or “statement” doesn’t fit your mindset. I personally don’t like horror movies, hard rock music, or romance novels. None of them fit my mindset. But that doesn’t mean they’re wrong. They’re just not my cup of cocoa (because I don’t like tea, either).

Which leads to the next puzzler about my critic: they didn’t like my “agenda” for one of my characters. This character is a young woman who rejects an overbearing potential suitor in order to spend time with a young man she admires. They work together, they  fall in love, and they get married. They continue to work side-by-side in their business, and are thrilled when they discover they are expecting a baby.

The critic stated that this wasn’t something they’d want their daughter to read.

Still scratching my head about that one.

For the world these characters inhabit, their behavior is completely acceptable and timely. [WARNING–POTENTIAL SPOILERS AHEAD!] If my agenda-fearing-complainer is worried that the characters are young, the character’s parents were 28 years old when they married. It’s all balanced.

Really, all of THIS is “an agenda”?

Love and marriage and family and religion and working together are all somehow . . . wrong?

Well then, yes: I have an agenda. As I’ve stated before (especially here), I believe in love.
I believe in marriage between a man and a woman.
I believe in growing together as a family, in having children, in working and learning together.
I believe all these things are good and important, and I’m not going to apologize or back down.

Instead, I sit here shaking my head in astonishment that the world has gotten to a point that I have to defend such a radical way of life. And I always will, trust me.

In the meantime, here’s an abbreviated passage from late in Book 4, The Falcon in the Barn, which was likely deemed so offensive. (I’ve tried to eliminate spoilers, leaving instead only “hinters”.)

“I guess I’m just surprised,” Mahrree murmured as another two women whose children she used to teach took a circular route around her. “This has always been such a nice village—”

A dozen people trying to get around them moved even faster.

Mahrree stared at her daughter in surprise.

“A nice village!” Jaytsy announced sarcastically, glaring at a few more dozen who stopped in their tracks to see what Shin was erupting this time.

“That’s what my mother just declared: Edge has always been such a nice village. And I wonder,” Jaytsy said, her voice booming as far as her father’s as she addressed everyone who had ears, “exactly what village is Mahrree Shin remembering?”

People leaked out of market fronts to cluster in whispering groups.

Now Mahrree knew how her family must have felt when she stood up at the amphitheater: complete dread.

Mrs. Briter gently but firmly brushed her mother’s hand away. “Surely Mahrree Shin remembers this village before it turned on itself to steal goods from those who died from the pox! Surely she remembers a village that appreciated its commander—”

Mahrree bit her lower lip and took a step back from her daughter. She’d seen that look before, in Perrin’s face. Jaytsy Shin Briter had something to say, and everyone was going to hear it.

Mahrree hadn’t realized before how much Jaytsy favored Perrin. Her dark brown eyes were wide with fury and her voice developed an authoritative quality that insisted everyone stop what they were doing and listen. Jaytsy carried the blood of the greatest officers the world had ever seen. Couple that with the fact that the generals’ descendant was also in the throes of expecting a baby, and it was a very dangerous combination indeed.

“—A commander who, on more occasions than you will ever know, put his life on the line to defend each one of you!” Jaytsy bellowed to the rapt and growing audience.

A few women broke away from the crowd and trotted purposefully down an alley.

Mahrree’s fists were clutched near her face in nervous fascination. . . . [As Jaytsy continued her rant, Mahrree kept] an eye on the growing crowd that was stunned silent. Villagers had subtly rearranged themselves, men in some groups, women in others. A few more women had slinked away and now Mahrree saw why: Chief Barnie was being reluctantly led to the market by a gaggle of outraged women. . . .

Mrs. Briter’s chest heaved furiously as she turned her glare on Chief Barnie. Two women were pushing him into the open space, and his stuttering steps made it obvious he would rather have been anywhere else in the world right then.

“Mrs. Briter?” He cleared his throat and firmed his stance.

Jaytsy folded her arms defiantly in a Perrin-like manner, and Mahrree massaged her cheeks. If she weren’t so worried as to what might happen next she would’ve been bursting with pride.

“Yes?” Jaytsy said with so much malice that Mahrree marveled how Barnie still stood erect.

“Do we have a problem?” Barnie timidly asked.

“She’s debating!” a woman shouted from the concealing safety of the crowd. “There’s laws against that!”

Mahrree watched her daughter, praying her response would be appropriate.

Jaytsy’s hands moved to her hips. “A debate?” she shouted. “Barnie, do you see anyone challenging me? Talking back?”

The crowd couldn’t get any flatter as Barnie obediently glanced around. He shook his head.

That did it. Mahrree couldn’t hold it in anymore. She burst into a grin which she quickly covered with her hand.

None of the villagers dared move a muscle. Even the angry knot of women glanced at each other hoping one of them could think of what to say next.

“Now,” Jaytsy began as she bent down to pick up her bread bag from the ground. She didn’t move like an expecting woman but more like a general retrieving his dropped sword. “My mother and I will be shopping here twice a week when the shops open, and if anyone here has a problem with that, I suggest you arrive after we leave. Mother? We need to start dinner.”

DISCLAIMER~ This very offensive, agenda-laden excerpt is from Book 4, The Falcon in the Barn. Read at your own risk.