Some years ago I was hired on as an adjunct composition instructor at a public university in the Carolinas. (We’ll allow this English department to remain anonymous.) At the faculty meeting held a couple of weeks before school started, several agenda items had to be addressed. After the usual introductions, someone of importance stood up and announced, “First order of business: the censorship of the freshman reading selection!”

That caught my attention in what would normally be a dull meeting wherein I’d fill half a page of doodles.

Each year the university assigned a novel for incoming freshmen to read in hopes of having an “intellectual discussion” between students and faculty during orientation. (Nice idea in theory, but in reality it usually fails.)

Just days before our meeting, a few parents had objected to the book choice, citing its violence and a few questionable scenes. I’d never heard of the book before (again, we’ll let it remain anonymous) but according to Amazon it was a “coming of age” story about a college student who was hazed. Today I looked it up again to refresh my memory and saw that it never became a best seller since interest in it died off quickly. Its couple dozen reviews hovered around a “3” calling the book dull, unrealistic, and lacking substance.

Which likely explains why, just the week before they were to come to campus, freshmen students were finally picking up the book, not liking what they saw, and complaining to their parents.

Those parents then complained to the administrators, who, afraid of upsetting those parents who paid for their students’ tuition, agreed to pull the book as required reading.

Which in turn enraged the English department. “Censorship!” they cried.

It occurred to me that telling students they didn’t have to read a book (which most of them wouldn’t have read anyway) didn’t constitute “censorship.” No one was insisting that the books be destroyed, or planned to burn them in the commons area. They just didn’t want to read something that offended their sensibilities.

I nearly guffawed at that, until I realized that the 60 or so faculty around me found that an entirely excellent way to Make a Stand.

Snickering quietly to myself, I then watched the most absurd display of bureaucracy. First, a committee had to be formed to write The Statement. That took half an hour, with several rounds of voting (my memory wants to say it was anonymous and with eyes closed, but maybe I’m just remembering “Heads Up, Seven Up” from elementary school), and finally a small committee was selected, and a chairman was decided, and times were set up for faculty to confer with them concerning The Statement. 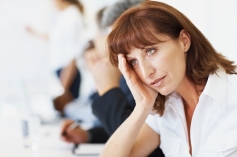 (Not an actual self-portrait, but pretty darn close.)

I would have been bored silly—I was there only to pick up a copy of course policies and find out what text I was to use—had I not been so entertained by the seriousness of the process, the lengthy explanations tossed about, and the excessively self-righteous language used to tear down the self-righteous who didn’t like the book selection. (It was pretty clear which faculty helped choose it, and were personally offended.)

After that entire fiasco, which took the better part of an hour, was completed, the next item on the agenda was, How to get students interested in becoming English majors.

I know I snorted out loud then, but covered it with coughing or something, because just moments before I was thinking, “Why the heck am I here? Why did I ever once think becoming a full-time professor would be fulfilling? They’re accomplishing nothing of importance! And just look at my notes: I’ve written, ‘Get me out of here’ over and over! What 18-year-old, in his or her right mind, would watch these proceedings and think, ‘Hey, awesome! I want to be part of that!’?”

The next excessively dull half hour was spent in another tidal wave of predictable “let’s have luncheons” (as if college students in this century do “luncheons”) and “let’s demonstrate how valuable an English degree is” (I was struggling to see how mine was useful) and “let’s have an open house” (seriously? An open house? To demonstrate what?).

At some point I probably blacked out from sheer boredom because I have no recollection of when or how that meeting ended. I just know that I wanted to leave, leave, leave.

Oh, and The Statement?

Five people spent two full days writing and rewriting it. And when they finished, they put a copy in each of our mailboxes.

That’s no “statement.” That’s a constitution for a fascist country.

I tried to read it.

My master’s degree is in rhetoric, but I could NOT get through it. So full of jargon and big, scary words, and sentences that went on and on and on pointlessly . . . I couldn’t even understand the first paragraph.

The Statement Committee threw a new fit of fury the next day when the school newspaper wouldn’t print the statement in its entirety.
They wanted a “blurb.”
Hey, who didn’t?

The local newspaper wouldn’t even touch it. I’m sure they didn’t even know what it was about. I sure didn’t.

I stared at the monstrosity and knew, right then and there, that English as a study was committing suicide.

What happened to writing directly? Plainly?

I wrote several versions of a statement in my head that day. One went something like this: The point of college is to expose ourselves to new ideas and experiences. We in the English department are disappointed that some of our incoming freshmen are choosing not to do so.

That’s a “statement.” Two or three sentences: something pithy, something tweetable.

Fortunately my husband was offered a job across the country, and just three weeks later I bailed out and moved far away from that stuffy soup.

Today Grammarly posted this cartoon below, which brought back those memories. I commented about my experience, and someone wrote back that he left an English site because it had become a “competition in obfuscation.” Amen! (By the way, “obfuscation” means “to confuse.”)

Years ago I thought English was the pursuit of reading books and poetry, analyzing others’ perceptions of the meaning of life, and then sharing those ideas with others. The point, I thought, was to try to make life bearable.

“Any lover of literature . . . knows . . . it is the enchantment of experiencing life through the consciousness of another human being, albeit an invented one, and gaining unique access to the vantage point gained by entering the mind of its inventor.”

But that’s not what I’ve been seeing.

Instead, my (admittedly) very limited experience is that many professors in English departments try to prove their worth in ever-deepening holes of thought where no one really wants to go. I remember a student in my grad school classes who was unquestionably brilliant, and you could see our professors stiffen every time he opened his mouth and said, “I posit that . . .” What followed next would be a length of jargon and rhetoric that none of us in the class could follow.

In fact, I think that’s when I started doodling in the margins.

Verlyn Klinkenborg wrote this about college students in The New York Times:

“They can assemble strings of jargon and generate clots of ventriloquistic syntax. They can meta-metastasize any thematic or ideological notion they happen upon. And they get good grades for doing just that. But as for writing clearly, simply, with attention and openness to their own thoughts and emotions and the world around them — no.”

His point was to show that students can’t write directly, and even he struggles to state that directly.

This isn’t a new trend, either. In the 1990s, the late Denis Dutton hosted the Bad Writing Contest for professors, and many of the “winners” were English professors.

Steven Pinker believes academics communicate horribly for a number of reasons: trying to impress their readers, to prove they actually know something, and getting caught up in the language itself. But, mostly, he says,

“There are few incentives for writing well . . . In writing badly, we are wasting each other’s time, sowing confusion and error, and turning our profession into a laughingstock.”

Yep. So glad my daughter’s majoring in nursing.

It took Mahrree a couple of weeks, but at the “bottom” of it all was a list she made to elucidate and disambiguate—
Clarify  what the Administrators were advising. Whenever she got stuck or tired trying to decipher the intricately convoluted—
Needlessly complicated language, she asked Perrin for ideas, and also received a few more insights from Shem. She discovered that the changes in instruction were only an advisement—for now. In the nebulous “near future” it would all be compulsorily mandatory—
Unavoidable.

4 thoughts on “Why English as a major is dying”