Like every indie writer, I’m hoping that my efforts to self-publish will someday be enough that I can pay a bill or two. I have no fantasies of big J.K. Rowling bucks (ok, not realistic fantasies), but I’m always looking for ways to knock down my car loan a bit.

So when an indie publishing company sent me YouTube testimonials from their best-selling authors, I eagerly watched to see what the grand secret is to making money.

Now, to be fair, I didn’t watch every last testimonial, but after the third one I began to see a distinct pattern, and it made me very uncomfortable.

The videos were well done, predictably following around the authors as they walked in grass, or along a beach, and maybe sniffed a flower or two, while the voice-over discussed how frustrating their former lives were (interestingly, most were school teachers) and how after independently publishing they had enough cash flowing in each month to not only take care of their children and pay their bills, but to quit their former jobs and take exotic vacations.

At some point I began to feel like I was watching an infomercial, so I wrote down the authors’ names and looked them up.

And my jaw dropped. 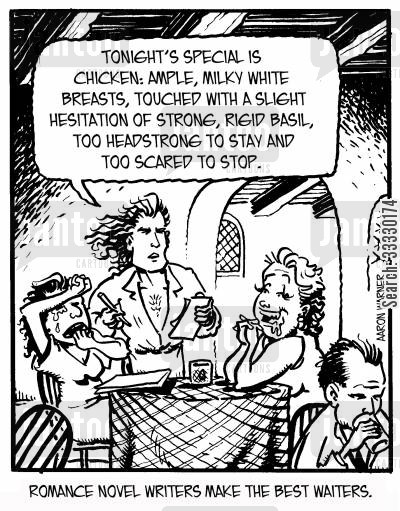 Not only did the subject matter shock and disappoint me, so did the books themselves. Many weren’t even 50 pages long and priced at over $5 for the e-book, which is hardly a bargain.

There were dozens of titles from the authors, all on the same themes of lonely women finding unrealistic men who are obsessed with, well . . . you know.
And the reviews were also disturbingly the same. I’ll spare you the details, but it was obvious by the hundreds of reviews that not one of the gushers cared about literary merit.

Occasionally I ran across a one-star review, and it was filled with dismay. “What a piece of trash! I can’t believe people are writing—and buying—this crap that reads like the notes we passed in 7th grade. Write the word ‘boobies’ and everyone gets all in a titter. Is no one noticing this?! What’s happening to books?”

I don’t know, but I agree—literature is taking a nosedive.  I’m sorry—I shouldn’t even call this literature. Let’s stick with “smut.”

These books are in the same vein as Fifty Shades of Gray, which is all about a woman repeatedly “achieving” something, and sold more copies than the Harry Potter series.

Our society is fond of believing that reading is good. Hey, it’s better than (fill in the blank yourself). In fact, it’s quite difficult to find anything that encourages against reading (I know—I’ve been looking). Because . . .

What you read changes you, for good or bad. And novel reading hasn’t always been held in great esteem. For many generations, calling someone a “bookworm” was an insult; you should be out working, laboring for your family, instead of lazing about the house with your nose in a book.

We’re all influenced by the books we read, some more than others. I can tell what kind of stories my children are reading based on their behavior that day. It’s not rocket science; it’s human nature. If we weren’t influenced by what we read, why would we bother?

There is something sacred, I think, about a great library because it represents the preservation of the wisdom, the learning, the pondering, of men and women of all the ages accumulated together under one roof to which we can have access as our needs require.  ~Gordon B. Hinckley (emphasis added)

Books can uplift and motivate us, but they can also send our thoughts into despair and fear, and everywhere else in between. There’s a certain magic there; but according to every fantasy book out there, magic is temperamental, and can go in any direction.

I’m anxious when I see how many sexually explicit and graphic books are now being written by women and for women. I can’t help but wonder, what does such an adolescent fixation on sex do to a person’s psyche and relationships?

Now, I’m sure there are those who will say I shouldn’t judge books and their contents. But to that I say, why not? Look at the reviews for any item on Amazon—those are judgments. Any time you think about reading a book or going to a movie, you ask for other people’s opinions (judgments) about it.

But what those who play the “don’t judge” card really mean is, Hey—you’re hitting a bit too close to home, and I don’t want to think about that right now. I’ve got another novelette about fat girls and their “achievements” to read.
The “don’t judge” argument is usually a front for, “stop making me feel guilty.”

This post is certainly not to say that all indie writers fall into this hole of smut. I’m acquainted with many self-published authors who create marvelous pieces of fiction and fantasy, who enjoy controlling their own work, and have written books that earn the title of “literature.”

In fact, I’m writing this rant in defense of the rest of us indie writers—the majority of us laboring to develop stories with character and purpose—to demonstrate we’re not all out to make a buck off of “low-achieving” women.

Our books are as different from these smut-o-grams as homemade, hand-breaded chicken fingers are from Chicken McNuggets. They may have similar names, but one is carefully prepared, finely balanced, and tastes marvelous, while the other is nasty chicken sludge boiled in oil.

That’s why I promise, right here and right now, that I will never make nasty chicken sludge, or write smut just to pay the bills. Some time ago a beta reader suggested that if I made my books more “interesting” (i.e. add some salacious details in the first chapters), I could really “make something of myself.”

That left a horrible taste in my mouth, and I told the reader I didn’t need them as a reader anymore.

Because how you feel after consuming something I created is far more important to me than my paying off my student loan debt. (And if you knew how big that is, you’d be even more impressed.)

2 thoughts on “Don’t read this, don’t write that”