Oh, my poor girl—are you really so lonely, so desperate, that you’ll do anything to get attention? You don’t have to. You can be a woman—a real woman—without becoming a prostitute, which I’m afraid is what you’ve done. You’re selling your body, but you could do so much more.

First, let’s put you in a classic little black dress, because I just can’t look at you in  . . . whatever it is you’re wearing. 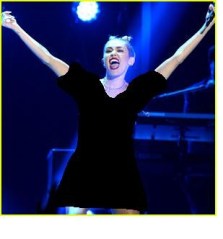 See? Don’t you feel so much better?

I suspect you want to show you’re not a “good little girl” anymore, although I don’t understand why so many in Hollywood think being “good” is “bad.”

But your behavior isn’t “adult.”
Strutting around in your underwear is what my toddler does.
And pretending to mate in public is what dogs do in the street.

You could do so much more.

Exploiting your body isn’t groundbreaking or original—you’ve just fallen for the oldest trick in the book.  Check the Old Testament—you’ll see that selling your body has been around for thousands of years. It’s not art, it’s vulgarity, and you can do so much better.

Look beyond the cheering fans in the audience, and see the reaction of adults—real adults, not mere grown-ups (my explanation about the difference is here). Adults who, by the millions, learned of your embarrassing exploits via the news.

We’re not cheering—we’re cringing.
Millions of women are rolling their eyes in frustration that, once again, the message has been lost that women have infinite value, fantastic worth, and incredible potential.

Millions of men squirm and look away because your behavior arouses something in them, and it makes them uncomfortable because they prefer to use those feelings for true women who respect and protect their bodies.

And the men who are enjoying you? They’re they same flabby, smelly guys that linger at the bra section of Wal-Mart. Creepy and icky, Miley. You can do so much better.

You could still be a real adult woman.

You can do so much more.

You want to prove you’re an adult? Than do something adult-worthy. Real adults—real women—use their influence and names for good. You may be too young to know these women, but do a little reading about Princess Diana and how she used her name to change the world’s view of AIDS victims.

Watch a few Audrey Hepburn movies, then look up how she spent her name and her later years taking care of starving and neglected children.

And another little black dress.

Take a good look at Eleanor Roosevelt, then find out what she did for civil rights when no one else was talking about it.

And yet another classic black dress.

Despite the chill in the air, Sareen seemed determined to show Shem exactly what she had to offer. Not surprisingly, several soldiers had converged around Shem to share in the view.
“Oh Sareen, this is just becoming sad,” Mahrree muttered, wishing someone would point out to the girl—maybe Sareen’s mother, who didn’t seem to be around—that her displaying behavior was most inappropriate.
. . . But for the moment, Sareen was happy for the attention that, someday, she’d realize she didn’t really want.

~(Soldier at the Door, Book Two)

7 thoughts on “Miley Cyrus, may I have five minutes?”