It’s fascinating to watch people suddenly clam up when they’re hit with the truth. What they do next is very telling. They’ll either dance in a frantic way to jig around what was said, or they’ll outright deny it with avoidance or accusations, or they’ll ponder in silence then thoughtfully say, “You may be on to something . . .”

I know I’ve done all three when hit with a truth I wasn’t expecting. Surprise makes us stumble. But I’ve always felt the most at peace when I consider that maybe I was wrong, and that maybe the other person is on to something.

Remember to get the newly-released short story, excerpted from Book 7: “Teeria Rigoff; Age, over 50.”

There’s even an audio component, too, if you want to listen to my dulcet tones put you to sleep for 40 minutes. Apparently my 10th graders love it when I read to them. They say it’s the best nap they get all day in school. 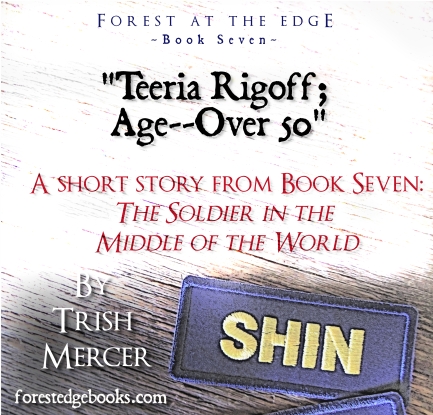 I’ve discovered that learning a “new truth,” which means that my “old truth” was actually a “poorly constructed assumption,” can be very unsettling.

However, when I ponder the “new truth” and realize the wisdom and growth that comes from it, I’m able to let go of the “poor assumptions” which I was so enamored with, and move on to a far more “stable, honest reality.”

Granted, judging what’s “assumption” and what’s “truth” is a struggle, but it’s the ultimate struggle of life. It’s the whole reason we’re here: will we accept the truth when we discover it?

Get the prequel The Walls in the Middle of Idumea here!

English was my mother’s second language, and she had a good command of it except for one word: she pronounced “crazy” as if it began with a g—“grazy.”

As a teenager, that drove me grazy-crazy, and finally one day I told her that.

“What?!” she exclaimed. “I’ve been saying it wrong all these years, and NO ONE TOLD ME?”

“I didn’t want to hurt your feelings,” I said meekly.

“But I sounded like a fool in the meantime and looked like an idiot. You should have told me sooner!”

I’ve thought of her anger and humiliation (she was studying Shakespeare at the time, just for fun, and usually beat me in Scrabble) and realized that I didn’t do her any favors by not correcting her errors.

I’ve seen a spate of postings and blogs lately about “loving” people and not correcting them when they stumble, because that’s “judging.”

But what about correction?

When a child writes the letters in their name backwards, or a teen driver crosses the double yellow line, or they punch in 10 minutes instead of 1 minute on the microwave, we CORRECT them: show them the mistake and help them fix it. That’s not judging or condemnation or shaming. That’s HELPING them get things right.

If ever I’m on the wrong track with something—an idea, a philosophy, a belief—please, TELL ME!

Don’t let me wander off some literal or proverbial cliff because you’re worried about “offending me.” Maybe you’re wrong, maybe I’m wrong, but let’s get it figured out.

People are quick to pull out the “God loves me anyway” argument, in all its various forms, but conveniently forget this in Proverbs 3:

11 My son, despise not the chastening of the Lord; neither be weary of his correction:

12 For whom the Lord loveth he correcteth; even as a father the son in whom he delighteth.

Young Pere said to his grandmother, “How about, you love me enough to let me go?”

Mahrree stared at him before saying, slowly, “If I love you enough, I will allow you to do something that I believe is potentially damaging to your soul?”

“Young Pere, you were more logical when you were eight! What kind of nonsense is that? If you love me enough. I love you enough! I love you so much that I’ll refuse to let you do such a thing without a better reason, even if you throw a fit and declare you’ll never speak to me again! That’s how much I love you, you ridiculous boy.” (Book 6, Flight of the Wounded Falcon)

Friends and family, love me enough to tell me when you think I’m making a mistake. Correct me, even if you think it may offend me.
How else will I know what the right thing is to do?

Because I want to avoid this:

Mahrree was worried about whose side she was really on. The only way someone could be “surprised” would be because they were sure they were on the Creator’s side, but weren’t.

What if they were already on the wrong side and didn’t recognize it?  (Book 2, Soldier at the Door)

By this same token, be warned that I will tell you if I think you’re doing the wrong thing.
You may become offended, that’s fine with me.
You may unfriend me. Again, that’s ok.
But I love you enough to tell you the hard truth, as I see it, to correct you if I worry you’re heading down the wrong lane.

I may be wrong (it’s happened quite frequently), but know that I will speak up because I don’t want you making bad choices, and I expect you to do the same for me.

I don’t want any of us to go grazy.

We’re past the day when we can trust the media and public figures to give us the truth. The world isn’t interested in accuracy; it’s interested in self-promotion.

More and more, those who seek the truth will find themselves in solitary pursuits, but what better cause could there be?