I go walking a few times each week, and yesterday went exploring a quiet, tracked lane by myself. It’s not hard to lure me into the woods, and I was surprised to soon find myself on a peninsula with untouched fields of wild blueberries and black berries. 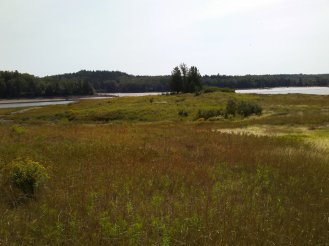 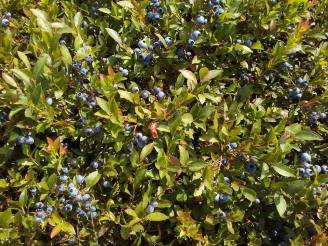 And I also found boulders!

But what I found at the end of the peninsula surprised me most of all: ruins.

I know this area has been inhabited by colonists since the late 1600s, by Native Americans for far longer than that (they’re the ones who dined on blueberries and lobsters hundreds, if not thousands, of years before anyone).

But these stones took my breath away. My first thought was, “This foundation’s still standing!”

With a little weeding (ok, getting those trees out might take a little longer) and some reshifting of stone, another house could feasibly be built there. Carefully fitted, these stones had remained solid for who knows how long.

Today I told my archaeologist daughter about what I found yesterday, and in ten seconds she sent me a link: I had “discovered” the remnants of Fort Foster, built in 1776 during the Revolutionary War to keep East Machias, Maine, safe from the British.

A forest, boulders, AND a fort?! I HAVE found Edge!

As for these stones, I don’t know how long they’ve been there; because the fort was mostly berms, these stones were likely part of some settlement structure before or after.

But they gave me goosebumps. Through years, through storms, through prosperity and poverty, this sure foundation has remained.

I thought about the horrific flooding in Texas, and I have no doubt that when the waters finally recede, and the devastation is fully realized, there will be something that remains: solid foundations. Marking where homes and lives used to be, and perhaps inviting lives to rebuild again.

In fact, in every devastation I’ve seen people face, as long as they have a solid foundation–a rock upon which they’ve based their lives–they can continue.

I was so struck with these images that I ran home and added new lines to Book 7 which I thought was finished. But, like everything, there’s always room to keep building and growing:

So often he’d found it hard to see himself, as if he were looking deep into his soul and was terrified by what he’d find, but tonight he wanted to see what was there. And what he saw someone a little lost but finally on the right track. He also saw his grandfather looking back at him.

He suddenly remembered the ruins of their burned house outside of the fort. Despite all that had happened to it, the foundation was still there and strong, and something new could be built upon it.

Then he understood. He still had a foundation, and something new could be built for him. ~Book 7, The Soldier in the Middle of the World, coming October 2017

6 thoughts on “Book 7 teaser–He still had a foundation, and something new could be built for him”