All I wanted was a Dr. Who Weeping Angel for my front yard for Halloween.

People are terrified of them. If you don’t know what they are, watch the episode “Blink.” (Try Netflix.) You don’t even have to know the first thing about Dr. Who in order to appreciate this episode. Weeping angels seem like innocent statues in parks and cemeteries, but when you blink, they move faster than lighting, touch you, and . . .

No, you don’t die. They send you back in time. For some reason, I love that idea and don’t find weeping angels scary at all. Unless they send me back to relieve 8th grade, then yeah.

But otherwise, they’re one of the most terrifying villains, and you can readily recognize a Whovian based on their response to weeping angels. One year my oldest daughter in college at BYU in Provo, Utah, spent a few weeks making a weeping angel costume, then a few hours getting ready to wear it on campus. When she was a gray statue bustling from one class to another, she’d stop, cover her eyes, and stand perfectly still.

That’s when she’d hear, “Holy cow! That’s a weeping angel! Oh my gosh, nobody touch her! Is she real? Yeah, she’s real! Whoa. That’s like the greatest costume ever–no, don’t get near me!!!”

She said it was the best Halloween ever. A few Dr. Who costumed students tried to subdue her with their sonic screwdrivers, but we all know that sonic has no power over ancient time zapping angels.

Four years ago I made my kids t-shirts that read “The angels have the blue box” (watch the episode “Blink”) and this family portrait, which will forever warm my heart, sits in prominence in my living room.

Over the years my kids have invited their friends over to see episodes of Dr. Who, and whenever the weeping angels were featured, those teenagers were quite nervous walking home at night. Being the nice mom that I am, I’d see their anxiety and tell them, “Then RUN home! And whatever you do, DON’T BLINK!” Then I’d slam the door and laugh as they hurried home, their eyes watering.

Maybe that’s why my kids don’t have friends over very often.

The cloak is also army surplus, and even though he couldn’t do a British accent, his “Are you my mummy?” was creepy enough.

Dr. Who is full of frightening references. Two years ago one of my sons wore his brother’s gas mask for Halloween (yes, we have an army surplus gas mask; doesn’t everyone?).  After he was done trick-or-treating, he sat on our front porch with the bowl of candy quietly saying, “Are you my mummy?”

Again we played “Spot the Whovian,” and found one very quickly. As I watched from the front window, a little boy happily tromped up to our front porch, but his mother had a nervous breakdown at our driveway.

“OHHHH. Look at the little boy in the gas mask!” (Her voice became an octave higher.) “Oh, very scary. Grab your candy, honey. RIGHT NOW! No, don’t choose something, JUST GRAB IT AND DON’T TOUCH HIM! Ha-ha-ha! Very good costume. GET AWAY FROM HIM!”

Especially when it doesn’t scare me, but scares everyone else. Weeping angels aren’t scary, neither are Daleks, which look like soda cans with toilet plungers, and can be foiled by stairs.

Nor are cybermen frightening, because even I can out-jog them. 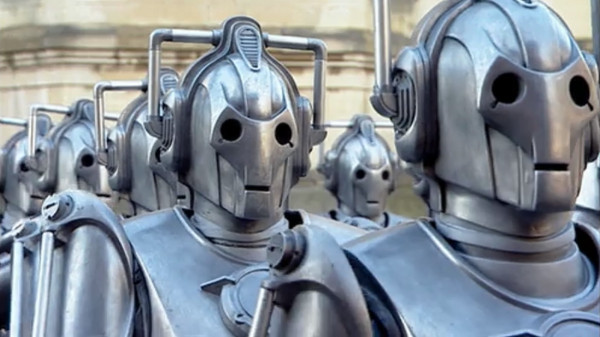 (The Borg from Star Trek, however, are truly terrifying man-machines.)

The Silence, on the other hand . . .let’s not talk about the Silence.  Really.

BACK TO WEEPING ANGELS!

When I saw this foam head at my local Joann’s, I realized her potential. I knew I was on to something when I bought a couple yards of gray fleece, and the young woman cutting my fabric asked the usual, “What are you making with this?”

It should have been simple enough. Make a simple gray dress, put it on a framework of pvc pipe, paint her head and stick it on top, paint long gloves for hands, and attach wings.

The head was easy enough. Using wood glue, straight pins, and rope, I glued on her hair, securing it with pins (foam doesn’t scream when you stab it).

Soon she had a lovely head of hair that looked like cut stone, especially when I coated it with a layer of exterior latex paint, tinted the same color as the fabric I purchased for her dress.

I added a braid of fabric for a headband, secured it with pins, then painted over the entire thing, and spritzed it with darker spray paint for a stone-like appearance.

(I thought she was rather pretty. My kids thought I was weird to keep referring to “her” as “my angel.” When I put her head in my bedroom for the night, my teenage daughter covered it with a cloth.)

Then I made the dress which, because I should have purchased three yards of fabric instead of two, kind of was a bit short.

(Excuse my son’s foot photo-bombing.) I cut a simple T, cinched in the waist, and put a braid of woven leftover fabric around the neck as a decorative touch, and also to try to camouflage the fact that I cut the hole for the head too big.

Then I realized the sleeves of the T were too wide (this ain’t no choir angel) so I cut those narrower. I’m not showing all the steps I took, because most of them were wrong. (That’s why I don’t have a “diy” blog. More like a “ddiy”–“Don’t Do it Yourself.”)

Well, I couldn’t screw up the arms and hands too badly, right? I purchased long gloves from Walmart, and painted them gray with the very good latex exterior paint.

Inexplicably, I thought it’d be a good idea to put the gloves on, then paint them.

Do you know what happens to thin gloves when they have a thick coating of very good paint on them, which then soaks through to your skin? I spent that night soaking my arm in the bathtub then scrubbed it with a washcloth for about half an hour.

Only later did I realize I should have put the wire skeletons I made inside the gloves, instead of my hand.

Theses are scary, all by themselves. Maybe I should just stick them in the ground, coming out of my forest.

That’s when I realized I should have put the wire in them FIRST, and then painted them. Sigh.

I twisted together 6 strands of wire for the arms to try to pose them, and it sort of worked.

Take off the arms at the shoulders. Give pipe sections to preschooler to use as guns.

Then my husband helped me make a pvc form out of 1″ pipe which toppled over by itself (we now have a green stake holding it up) and the arms were useless, so we pulled them off.

Now her body is only a T.

I ran the 6 strands of wire through the shoulder section of the pipe, and twisted the arms and their wires together. When the wind blows, she quite comes to life.

I put the dress form on the T and painted it with a coat of the exterior paint to make it stiffer, and followed up with spritzes of the darker gray spray paint.

It stiffened up the fabric rather well, and spraying darker gray into the crevices added depth.

As for the wings I purchased foam core boards, and cut out a wing shape. Later, I discovered a razor blade is far, far easier than using scissors. I sketched on the scallop of the wings, then using thin plastic, I cut out the feathers and glued them on to the wings, trying to create a layered affect.

From the foam core I also cut another ridge for the top of the wing, trying to give that also more dimension. Again, I painted it all with the exterior paint and highlighted (or lowlighted?) it with the darker gray spray paint.

As for attaching them? After much trial and error with wire, I just bought the strongest duct tape I could find and wire and taped them to her. When the wind starts to blow, I put her in the shed so she won’t fly to pieces.

After again many problems and issues, I finally got her together and placed in my forest. And, here she is:

All right, I admit she looks emaciated, ill-proportioned, and decrepit. Which, at Halloween, is actually a good thing.

My husband asked how expensive it would be next year to buy a mannequin and just paint it.
Or how good my skills were with acrylic and molds.
My teenage daughter patted me on the back and said, “Not . . . too bad, Mom.”
My teenage son, however, glancing it in the dusk of evening between the trees said, “Hey, that’s not bad!”

When the sun’s setting, and you’re driving past it, and you glimpse it out of the corner of your eye for a brief moment, she’s pretty convincing! As with most Halloween decorations, it’s much better from afar than up close.

I’ve ordered this screeching Weeping Angel mask for her to wear for Halloween. (And I’ll paint it the correct shade of gray.)

That’s when I’ll unpin her hands from her face (remember, foam doesn’t scream) and I’ll extend her arms to touch the parents of trick-or-treaters and send them back to the horrors of 1969.

So if you come around my house, don’t blink!