Because we don’t want to think. That’s so like, boring. <insert eye-roll>

We don’t want to study, to research, to ponder, to analyze–we just want to be fed so that we can get back to playing and being entertained, as quickly as possible.

Give us easy information, sensational too, because we love to be entertained. 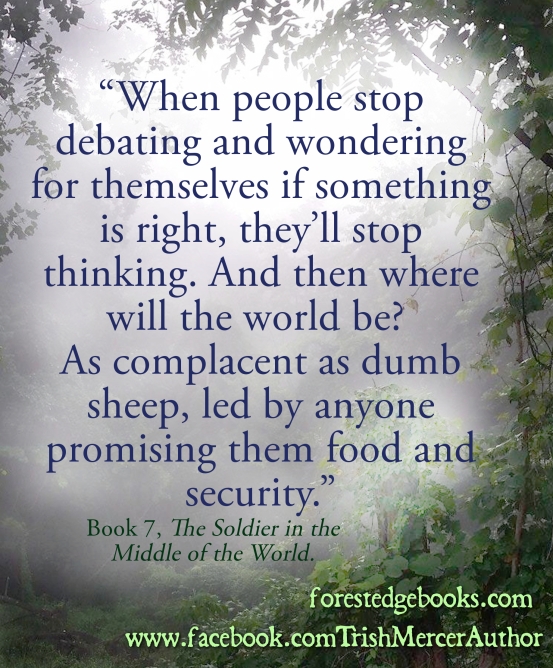 And we’ll follow whoever makes life the easiest and most entertaining for us.

Which is why we’re running headlong into big trouble.

Anyone remember ancient Rome, the bread and circuses?

That’s what I was afraid of.

(By the way, that book 7 I keep promising? It’s so close I can taste it when I lick my laptop. Um, maybe you didn’t need to know that detail . . . sorry.)

Last week Senator Diane Feinstein tried to shame a judicial nominee, Amy Barrett, law a professor at Notre Dame and a Catholic mother of seven children, for her religiosity. Feinstein said, “the dogma lives loudly within you.”

It was meant as an accusation for Barrett’s devotion to her religion.

But I can’t imagine great praise being leveled at anyone. To be so true to your convictions that others can witness you “living loudly”? Shouldn’t that be what we all hope can be said of our lives?

Catholics have marvelously embraced this phrase, employing the hashtag “dogmalivesloudly”. Others are saying it’s their new mantra, their goal in life, that everyone can see exactly how they live.

I’m not Catholic but a fellow Christian, and when I read about this yesterday (I missed it while following all the hurricane news), my arms tingled. I have no idea who this Professor Barrett is, but suddenly I really want to meet her.

Often I’ve heard that Christians should be recognized by how they live, that their examples should be obvious. The Apostle Paul proclaimed, “For I am not ashamed of the gospel of Christ,” (Romans 1:16) and he definitely lived as he believed.

But such “living loudly” frightens some people, understandably. Remember how the Apostle Paul died, as a martyr? As did Peter, James, Stephen . . . well, just about all of the Savior’s apostles died because they “lived loudly.”

Not that I’m suggesting that holding firm to our Christian beliefs means that we can expect martyrdom, but to be honest, that has happened, and is happening, and will happen in the future.

The world doesn’t like Christianity, but that’s ok, because the approval of the world isn’t what we’re after. We’re here only temporarily. (Atheists, on the other hand, think this life is all there is, so getting everything they want right now turns them a bit dogmatic in their own ways.)

This earth life is merely a blip in our existence, a brief sneeze of time, but such a very important one. It’s an all-inclusive test, to see what we’ll believe, what we’ll pursue, and what our hearts really want.

What we do here tells God what we want to do next. And that “next” is going to be an eternity. That’s why we Christians are also so dogmatic about getting things right.

Peto grinned at his wife. “So last night made up for yesterday?” he asked.

“Oh, yes,” Lilla said fervently. “The Creator made up for it in grand style.” She looked up at the sky. “THANK YOU!” she hollered.

Peto and Shem flinched in embarrassment as a few people in their fields looked around in confusion. They waved uncertainly at the four riders, not sure what the loud thanks was for, and Shem and Peto waved back, trying not to snort.

Calla chuckled at her sister. “Why not? THANK YOU!” she called to the sky.

~Book 7, The Soldier in the Middle of the World, coming October 2017

I’ve been trying to find examples where this isn’t the case lately, but . . . nope.

Perhaps the biggest threat to institutions are those folks who actually spend five minutes thinking about the issues. Most people just deliver a knee-jerk reaction (emphasis on the “jerk”) concerning any issue–racing to protest, to complain, to throw a fit–without actually analyzing why they are.

In my inconsequential opinion, every political side has become extremist and sensational, leaving what (I hope) is the majority of us watching the swirling all around us, waiting for a break in the action so we can make a collective run for it.

It’s those who ponder and think, who don’t jump to conclusions or accept the scandal of the day as doctrine, who will (hopefully) eventually change the world.

Over the years I’ve become more judicious in what I read, watch, and listen to. Everything I take in effects my thoughts, which in turn alters my behavior.

Maybe it’s because in the past few years my parents and sister died, and a dear friend is losing her battle to cancer, that I’m acutely aware that life is short.

I don’t have time–nor do I want to have time–to waste. Every day needs to be focused on improving my mind and my heart.

Hugh Nibley, in “Zeal without Knowledge,” summed it up best:

The more I’ve decluttered my mind (as I’ve been doing with my house) the simpler everything is. There really is time and space for the important stuff.

No men who Jaytsy cared about were interested in fashion or the theater. It was all fake and contrived, and unappealing.
But she knew what she did love, and it was glorious to no longer worry about the world’s opinions. She loved real things. Dirt on her hands and under her fingernails. Flicking insects off the corn. Filling wagons with potatoes. Braiding the greens of onions together. Measuring milk yields. Churning butter. Sampling cheeses. Looking into cows’ eyes.
~Book 4, The Falcon in the Barn