Updated for a friend who’s wife is, well, confusing him . . .

In Forest at the Edge of the World Joriana Shin sends her son a list of how he should behave when his wife is pregnant. A few points are mentioned in the book, but some readers have asked me to post the full list.

Having been pregnant nine times, I feel I have a bit of experience with the topic. I will hand the list below to my own sons and son-in-laws so that they won’t accidentally destroy themselves with their own ineptitude.
(Heaven knows my husband could have had a list like this. I don’t think I’ll ever get over #3. Neither will he.)

17 Rules of pregnancy for husbands

1. She will become irrationally testy at the most unexpected moments. Let her.

Remember, the reason she’s expecting a baby is, after all, your fault.

2. Remind her how beautiful she looks carrying your child. And be grateful you’re not the one that’s expecting, because you’d look ridiculous.

3. Never, ever use the “f” word; don’t even think the “f” word in her presence. If you say “fat,” is should be only in reference to something on your steak. (Also never say something such as, “Speaking of walruses . . .” when you see her roll over.)

4. Her vocabulary may change, including words you’ve never heard from her before, such as “weensy,” and “sweetadorableness” and “thatisthecutestthingever.”

5. When she can’t sleep, don’t attempt to give her any advice such as, “Just close your eyes and relax.” Instead kiss her on the cheek, tell her you’re so sorry, and then make yourself comfortable on the couch. For the next five months.

6. Do not attempt to bounce anything off her belly, even if you’re sure the pebbles would sail an impressive distance.

7. Accept the blame for everything. Everything.

8. Remember to look her in the eyes every now and then, before evaluating her bulging belly. And whatever you do, do not let your eyes bulge in surprise. Those changes are, after all, your fault.

9. No matter how tempting, do not use her belly as a shelf.

10. She will feel the need to reorganize everything. Help her. Remember: your fault. 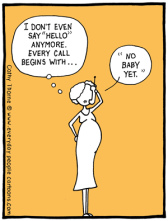 11. Near the end of the pregnancy, don’t tell her it will all end, because she won’t believe you and may try to harm you.

12. Don’t try to poke her belly button back in.

13. If you absolutely feel you must say, “Whoa, is that normal?” do so in the kindest, most helpful tone possible. And try not to flinch at her answer.

14. When she goes into labor, do your best to comfort her: rub her back, massage her feet, tell her she’ll be just fine. She’ll likely be aggravated by every attempt you make, but still try. And don’t take it personally when she shrieks that you will never be allowed within twenty feet of her again. She’ll change her mind in a few months.

15. After the baby comes, she will cry and cry and cry. Your wife, that is. If she doesn’t stop in a few weeks, call her doctor. Carry her in to the office, if you must. She’ll thank you later, in a few months.

16. Early on, remember: food, your house, and especially you do NOT smell as bad as she claims. Probably. After the first three months her nose will recalibrate, and then she’s going to make up for everything she’s missed out on. Until then, shower frequently, carry mints, and don’t even THINK about fish.

17. Morning sickness (afternoon, evening . . .) is NOT in her head. It’s caused by massive surges in hormones. And so is anger, so if you dare suggest her illness is in her head–well, you’ve been warned.