When I first drafted those words above, probably back in 2010 for what eventually became book 5, I really didn’t think we’d get to this position in our own world. At least not for another 30 or 40 years, and only once I was senile enough to not notice.

But ten short years later I’m reading daily about how people, groups, and movements are “canceled” because of their opinions.

Political commenters are calling for those on the sides “opposite” of them to be punished after this election.

Leaders are threateningly suggesting that those who vote against them will regret their decisions in the future.

Friends and family are attacking each other on public forums, calling each other “sheeple,” or “oppressors” and, in once case, reported a family member to the police on false charges in vengeance for a slight on social media.

We haven’t reached the level of laws against ideas yet, but considering how rapidly we’ve run into this state of chaotic accusations and offenses, I can’t imagine it’s too far off. I remember my parents telling me stories about having to be careful about what their families said in Nazi Germany, because they were never sure who was listening in and who would turn them in.

I never imagined we’d forget so much of that horrific history that we choose to repeat it, but here we are.

We’ve long ceased being a republic; we’re well on our way to a dictatorial leadership of some kind. And such leadership can exist safely only when its enemies have been silenced.

I’m slowly learning to stay out of these fights. No one’s opinions will change because we tell them they’re wrong, just as we won’t suddenly agree with those who accuse us of ignorance.

The only thing we can do right now is rise above the mudslinging, the anger, the fury. I keep thinking of Legolas in the first “Lord of the Rings” movie, walking on top of the snow drifts that his companions struggle to slog through. We have to stay above it, or it will drown us.

Because more and more, I’m feeling that a different future awaits those of us who try to remain kind, calm, and compassionate. More and more I’m not only hoping and praying, but also looking forward to a place that lets us live in peacefully even with those we may disagree with, without any threat or retribution.

It’s coming. We need to make sure our hearts are ready to receive it. If we will be one, we will be His, and safely with Him. 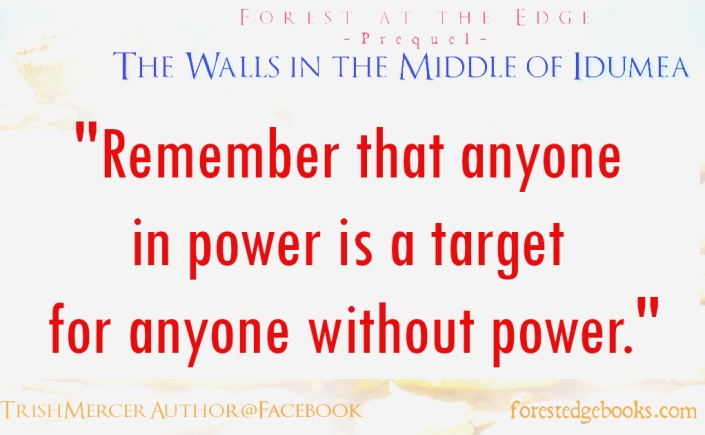 I’ve never understand why people want to be “in charge.” They must think there’s great status, or acclaim, or money.

But it’s responsibility, criticism, and working far more hours than one will ever be compensated for.

That is, if the leader in power is doing things right.

I suspect most who crave power are intent on doing things wrong; they want people to praise (worship) them, they want every convenience and toy available, and they want no one to stand in their way.

Those who are power-hungry are simply toddlers. You can tell by their tantrums, their screaming, their raging, their demands to get whatever they want, and everyone else can just shut up.

The first time one of my toddlers screamed at me in a fit of fury to “shut up!” I was at first astonished, then I burst out laughing. My toddler responded by screaming more and more, until I put her into time out so that I could try to stop laughing.

Worryingly, adults who demand power and influence, and throw tantrums when the don’t get it, are much harder to put in a chair in the corner. Nor are they nearly as funny. I rarely find myself laughing anymore.

I’m deeply concerned that someday they may get exactly what they want, through their manipulative bullying tactics. And the last thing they’re going to be concerned with is their responsibility to others. They want the power to serve themselves.

Such “toddlers” in power would be a terrifying thing. That’s why we all need to act like grown ups and not give in to the tantrums around us.

“If they can’t manipulate me—and they’re discovering quickly that I’m no Stumpy—then they’re going to discredit me and try a new tactic. Call me paranoid, but since I don’t know who’s working for whom—and if anyone is actually on my side besides the enlisted men who I bribe with snacks—I can’t trust anyone,” Pere confided.

“Oh,” Relf said, his voice small. “That’s why you didn’t want me to speak until we got home.”

“Exactly. There are spies everywhere, son. Walking casually past, following a few steps behind, waiting in a shrub. It’s also why I don’t employ servants, or want to move into a larger home where we would need servants. Trust no one, Relf, not even your servants. They’ll bring you your meal with a smile one day then stab you in the heart the next.”

“Pere!” Banu exclaimed. “That’s not fair! My friend is a servant.”

“And maybe we’ll employ her when all of this mess calms down. Until then, I stand by what I say, Relf. If not the servant, then the relative or friend of one. Remember that anyone in power is a target for anyone without power.”

~The Walls in the Middle of Idumea, available now on Amazon and here. 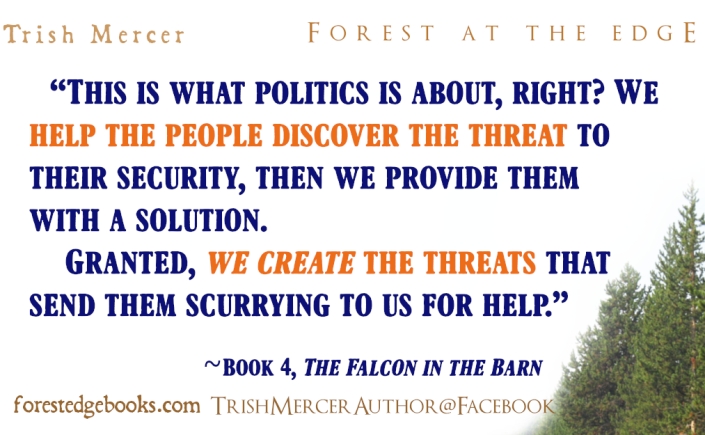 Ideally, our elected politicians solve the problems WE, THE PEOPLE assign them.

Ideally, politicians are OUR employees, working for OUR communities’ greater good.

Invariably, politicians forget that when they get a little power, and will do whatever serves their futures, not ours. There’s no wound they won’t reopen, no minor issue they won’t distort, and no real problem they won’t ignore to ensure their personal success.

Get Book 4: The Falcon in the Barn, here. (And the rest of the series here.)

“We have learned by sad experience that it is the nature and disposition of almost all [people], as soon as they get a little authority, as they suppose, they will immediately begin to exercise unrighteous dominion.” Doctrine and Covenants 121: 39

With so many in the US calling for “fairness” and for the government to ensure (enforce?) that fairness, we have forgotten that creating equity and caring for the poor is already within our power.

We each can balance the world correctly. In fact, we’re the only ones who can. There’s nothing stopping me or you. Change has always been grassroots. It never works from the top down. If we wait for someone to force us to do what they think is right, then we’ve agreed to a dictatorship.

Then it’s all over, for everyone. 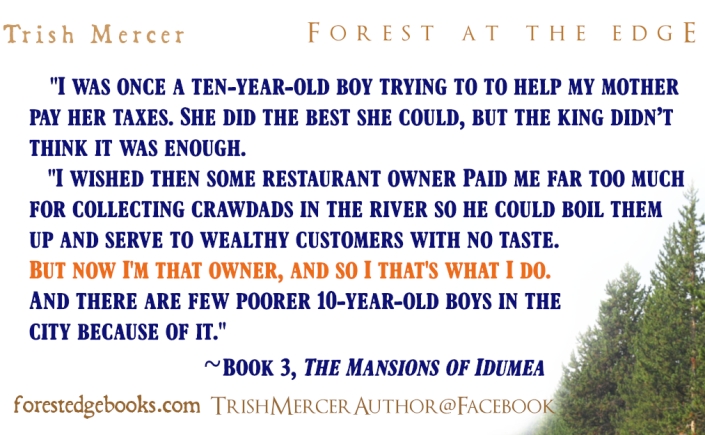 I know of many generous people who quietly go about doing great things for their neighbors. They donate money, they create opportunities, they sacrifice their time, talents, and everything they’ve been blessed with to help others through rough patches, to get job training, to give them a boost up to self-sufficiency.

And they do it anonymously. They choose to live well below their means so that those means can lift those around them.

I know about these generous people only because they’ve helped us, or because a mutual friend revealed to me the lengths of their care for those around them.

I stand in awe of them, because no one told them or forced them to do it. And that’s why it works. Only individuals can care for each other properly; governments have never got it right.