I had several readers contact me about the descriptions in my book series of the Pox and how it mirrors much of what we’re seeing with COVID-19. While I based my “plague” on a genetically-vulnerable version of small pox, and the Spanish Flu of 1918, much of what I learned while researching and writing applies to now.

Here’s what I think we should be doing:

1) Stop complaining. All of us are suffering—every last person. Universally, we’re universally disappointed. I’ve had students and friends tearfully tell me that dances, graduations, weddings, and events are being postponed or cancelled. Well, mine too. Money and hours I’ve personally put toward an event may never come to fruition, and here’s the thing—EVERYONE is suffering from extreme disappointment. And there’s always someone suffering far worse than you. So let’s get past it and start being useful.

Jaytsy hid her face in her hands, feeling betrayed by everything in the world. “It’s not right!” came her muffled cry. “It’s just not fair!”

2) Check on your neighbors and friends, especially the elderly, those receiving cancer treatments, or otherwise dealing with compromised immune systems. Many of us find we now have extra time. Perfect! Knock on the doors of your neighbors, take several steps back to keep a safe distance, then ask, “Do you need me to pick up your groceries and drop them on your front step for the next few weeks? Do you need your dog walked? My kids are home from school, they can help. I see you have chickens. Can we gather the eggs for you? It’s going to snow tomorrow—can we clear your sidewalks later?” Take care of each other. There’s never been a better time.

Perrin pointed at him. “Remember this moment when you first realized that the government can’t properly take care of people. In fact, that’s never been their responsibility. They’re supposed to keep our borders safe so that we can live as we wish. It’s our responsibility—yours and mine and Zenos’s and everyone else’s—to take care of each other.”

3) If you get sick, STAY HOME and keep everyone home with you. We know what to do: binge watch TV, surf the internet, or—best of all—read a book and get some sleep until you’re better. We know what to look for: fevers, aches and chills, coughing, and runny noses. You or your family come down with those symptoms, stay home. Do NOT run to the hospital. There’s nothing they will do for you because it’s a VIRUS. Antibiotics don’t work. Your body will fight it off in time. Treat the symptoms with over-the-counter drugs, and rest, rest, rest. So when do you run to the hospital? See #4.

About two hours later, after half the neighborhood consisting of Hycymum’s old sewing club had come to her Cottage, assured Mahrree they would prepare her mother for burial, and gave her wet kisses, Mahrree finally accepted a ride home.

(SPOILER: this outpouring of kisses proves to be a bad strategy for old ladies. Book Four: The Falcon in the Barn.)

4) IF you find yourself unable to breathe, that means pneumonia is settling in, and that’s when—and ONLY when—you need to go to the hospital. Pneumonia’s the real problem, which very, very few people develop. So for 98% of us who might get sick, don’t even bother the doctors or hospitals. You’ve weathered nasty colds before. Just deal with another one. You’ll be fine.

Mahrree remembered something. “Wait a minute—you’ve been here the entire time I’ve been ill? What about the fort?”

He looked into her eyes. “The fort can function without me for a while. I had some leave coming anyway. I belong by your side.”

Mahrree blinked. “Four days? You’ve never been away that long without being unconscious or seriously injured.”

He shrugged. “Shem kept an eye on things for me. So did Jon Offra. Whatever Thorne may have changed in my absence, I’ll just right again.”

5) When all of this is over, realize that the bigger problem will be coming. “Wait a minute,” I hear you saying, “the danger of illness is over—all is great again, right?” No, it won’t be. Look at all the businesses closing, the massive amounts of revenue being lost to canceled events, the shortages we’re facing because of fear. Generosity of companies now (providing free internet or paid leave of absence, etc.) means they’ll have to make up those losses later. The financial cushions companies have built up will dry up in a few weeks, maybe months. Unless they find ways to recoup those losses, their employees won’t be paid and companies may collapse.

No one’s saying it but I will: We’re looking at a future financial crisis, likely globally, that will take months, if not years, to recover from. This, I believe, is when the real trouble will begin. People will become greedy. They’ll want “compensation” of some sort for their suffering (although ALL of us have suffered). They won’t accept that suffering is a part of life, but will panic when they feel they’ve “lost” experiences, possessions, or people that won’t return. That’s when #6 will become vital.

“Once that numbness wears off, it will turn to pain. And no one seems to think that pain is part of the human condition; they seem to think they should be compensated for it.”

(Book 3, The Mansions of Idumea)

6) Realize that we are a resilient species, that physical and financial losses in one area always mean emerging opportunities in others. When this is all over, we’ll have choices to make: Will we a) graciously acknowledge that life is hard but we are creative and can cope, or will we b) crumple like spoiled children, demand someone to make everything better, and throw violent tantrums if they don’t? We’ll be a lot happier and more satisfied if we follow the first route rather than the second.

In my books I speculate about people looting and rioting to be compensated for their losses. The fact that they lived through the illness wasn’t “reward” enough. Greed and fear take over. In a way, that’s already happening. (I don’t know why people stock up on TP and water. I was stocking up on chocolate, and I made sure there was plenty left for others.)

Mahrree looked out the dark window. “They’re just like animals,” she decided. “No. Worse than animals. We may no longer debate but we’ve retained our ability to rationalize away logic and compassion. We can be so great, or be so terrible. It seems we’re content to just be terrible.”

(Book Four: The Falcon in the Barn)

There’s little we can do about the events already set in motion; we need to seclude ourselves, take care of others, and ride out the virus. It’s after COVID-19 has gone, when we try to make sense of what we have left, especially financially, that we need cool heads, calm hearts, and reminders that we’ve come through far worse.

“I believe the Creator intends for us to use our surplus to help those in need. He’s giving us an opportunity to do something good for others, not take a reward just for surviving.”

All of us had ancestors who survived multiple bouts of the Black Plague. (If they didn’t, you wouldn’t be here.) Our species has also survived massive volcanic explosions, world wars, tsunamis, and financial disasters. We’ll survive this, and quite well, too, with the right attitudes. Faith over fear, every time.

Help everyone around you remember that as well.

“We realize that we’re asking you to put a great deal of faith in us, but I promise—you’ll be glad you did.” 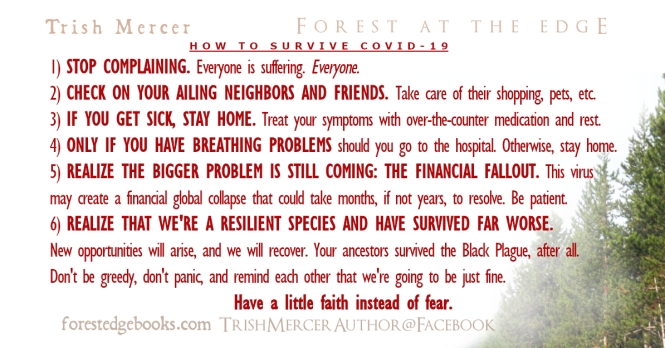 (And by the way, I have been blogging every week, just not here. If you’re at all interested in AP Lit, here’s what we’ve been doing this semester. This has taken a great deal of my time, and seeing as how our school will likely sometime follow suit and go online with all of our classes, it’ll take even more.)

An acquaintance once accused me of being “delusional” because of my religious convictions. They didn’t mesh with his beliefs, therefore I was wrong.

But as I thought about all that I believed, I realized it gave me immense comfort and hope. Without that, I’d crumble and die.

So here’s my philosophy: Perhaps what I believe is delusional (and when you get right down to it, all of us are delusional at some level and in some way, such as hoping everyone thinks that is your natural hair color). But so what? If my delusions don’t harm you in any way, then don’t worry about them.

My acquaintance insisted that my beliefs in an afterlife were spurious, and that when I died I’d “be surprised there wasn’t anything there.” (I won’t deal with that illogical logic right now.)

I countered with, “My belief of what lies ahead make me happy, today. If I gave that up, I’d be despondent for the rest of my life. I’d rather be delusional and happy, than be ‘right’ and miserable.”

He rolled his eyes at me, but I grinned back. I never wanted to live as self-righteously as he did. The poor man’s confidence only in himself and his brilliance made him absolutely wretched.