“That is some nasty water!”

Those were the first words out of my mouth yesterday as my husband and I, celebrating our 26th wedding anniversary, pushed the canoe out on to the water. 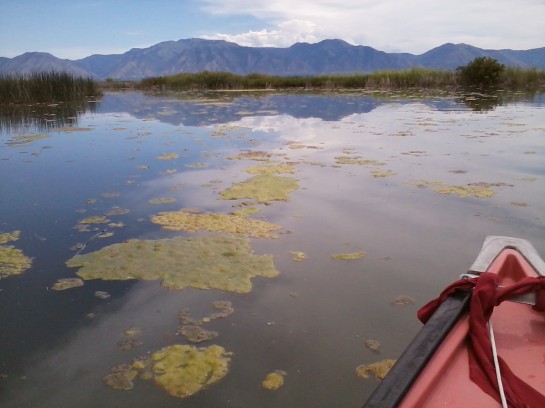 For years we’ve said we wanted to explore the extensive marshy regions in our valley, and finally we were doing it, setting out to see how many birds and critters we could find.
But we were startled at the condition of the water.

“Well,” my husband said, “it is a marsh. And I guess it’s supposed to smell like Shrek’s backyard.”
We soon learned how to paddle without splashing each other—we didn’t want that murky gunk on either of us—and enjoyed gliding past cranes, egrets, and the occasional pelican. 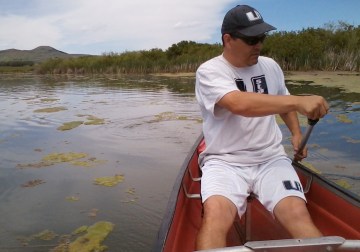 Suddenly, we found our paddles sticking, because the filthy water hid the fact that just inches below us was thick mud that smelled like Shrek’s outhouse. Eventually we had to resort to pushing our paddles into the mud to get out of the shallow patches, a few hundred feet across.

Once, after our paddles were sucked nearly out of our hands by the deep mud, I entertained the notion of stepping out of the canoe to push us free, but couldn’t imagine getting any of that mess on me.

“Not quite as romantic as Venice,” my husband commented at one point as he tried to punt us out of particularly sticky area, overgrown with algae.

That’s when the carp started. Apparently the temperatures were right, and love was in the air. Did you know that carp try to spawn on top of the water? Well, we know that now. If we had a bucket, we could have scooped up the giant things, some at least 18 inches long, as hundreds of them further disturbed the shallow muddy water around us.

At the end of an entertaining and tiring hour (canoe seats are not known for their comfort) we headed back to the pier, grateful we never got wet. Even though the channel there was deeper—maybe four feet—that water still wasn’t anything I wanted on my body. 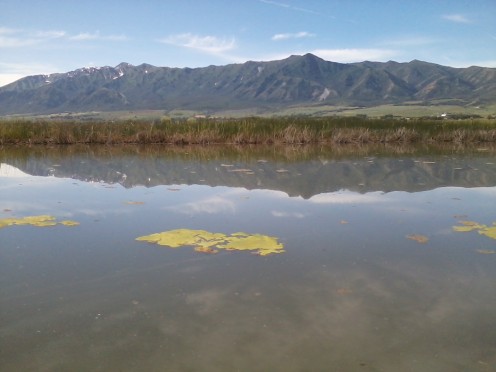 Nice reflection, but take a close look at that water.

Obviously, not everyone felt the same way did. We drifted upon a family—dad, mom, and a girl about 9 years old—floating on large tubes. The dad said to his daughter, “You ready?”
When she cheerfully announced she was, the dad tipped over her tube sending her straight into the muddy, stinky water full of immoral carp.

My husband and I shared the same look: Get that girl a bottle of Clorox!

The girl’s parents nodded to us, as if they were sure they were going to get the “Parent of the Year” award for finding a free swimming area for their daughter.

Interestingly, neither of her parents wanted to join her, even though she claimed the water was nice and warm (tons of bacteria, algae, and biology going crazy will do that to water), and eventually they helped her back onto her tube.

Now, it’s not like we’re opposed to swimming in nature, or think that swimming pools are the only safe way to go. We’ve shocked others by allowing our kids to wade in the rivers in Yellowstone National Park and the Pacific Ocean off the coast of Northern California. Lakes, reservoirs, slow moving rivers–even the mighty Mississippi–have all have bathed our babies, and always first their father. (I usually stand on the bank, with towels.) 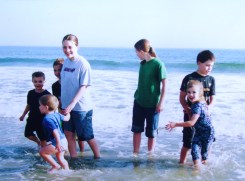 Seriously, it was 72 degrees outside, Christmas Eve . . . and we were NOT going in?!

The best looks we ever got from strangers, however, was on Christmas Eve in Myrtle Beach, where our kids happily charged into the ocean and declared it warmer than the Yellowstone River. Several families were walking along the shore, but not a single person dared set a toe in. (And sent several disapproving looks at me, which I ignored.) My husband has a habit of diving into any water he can find, and dragging his children along as well, but on one condition: the water must be clear. If he can see the bottom, never mind the season or the temperature—we’re going in.

But not everything is worth submerging ourselves into, even if it looks inviting. For my semi-aquatic husband to say yesterday that he didn’t even want to touch the marshy water (“Next time, we’re heading up the canyon so I can ‘accidentally’ tip us over in a decent river.”) the situation is indeed serious.

After we paddled a sufficient distance away from the family that thought nothing of letting their daughter play in a dreary water world, my husband said to me, “Just how murky does the water have to be before they decide it’s too filthy to toss their child into?”

I’ve been thinking about that ever since, in many different ways. Everything, it seems, is growing murkier, and at some point we have to look at the churning around us and say, “We’re not getting into that.”

For example, the past year I’ve been more and more reluctant to use a family email we established 15 years ago. Back then, the service provided general news–helpful and innocuous. But over the years I’ve noticed it become more salacious, more liberal, and definitely more slanted. Every day there are articles promoting behavior that I teach my children to avoid, biased pieces mocking values I hold dear, and outright distortions of my beliefs and occasionally even my religion.

That water, which we used to freely swim in, is growing filthy.

But the question for me personally is, How murky does it have to get before I finally abandon it? Some days I feel like I’m jogging through Sodom and Gomorrah just to pick up my mail. The fact that the address is linked to so many subscriptions, family, and friends is why we’re hesitant to close it. I know that eventually I’m going to need to, but what will finally be the tipping point that makes me cry out, “Disinfectant for my eyes! Now!”

Already we’ve abandoned radio stations, types of music, certain kinds of video games, the vast majority of TV, movies of certain ratings, and books recommended to us because of the filthiness we didn’t want to wade through. And interestingly, we haven’t missed what we’ve left. We’ve found other places to swim, so to speak. There’s all kinds of marvelous options available to us, if we just make the decision to find them.

So, even as I write this, I realize I need to get out of the waters the moment I see them becoming polluted (and figure out how to transfer everything out of my old email address). But I’ll be the first to admit: sometimes we’re slow to remove ourselves from the slime–even though we know staying clean is a whole lot easier than scrubbing off the filth–maybe because we have a hard time believing that all around us is becoming toxic.

Or maybe it’s become muddy so slowly that we haven’t even noticed, because we’re distracted elsewhere.
For example, take the photo below; I was trying, with my cheap phone’s simple camera, to take a picture of the pelican in flight (that white triangle in the distance). But instead, I ended up with a clear picture of the water around me that reminds me of a cesspool. 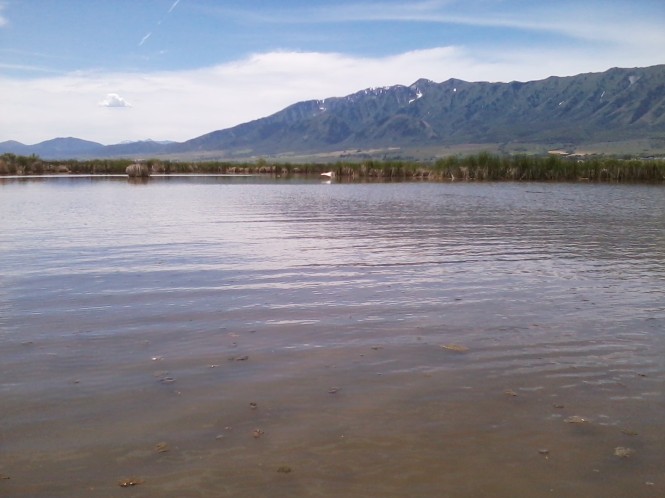 I think I need to be looking more closely, more frequently, at what’s surrounding my family and myself. And keep my feet in the canoe.