Here’s my Valentine’s treat: the title of Book 6: 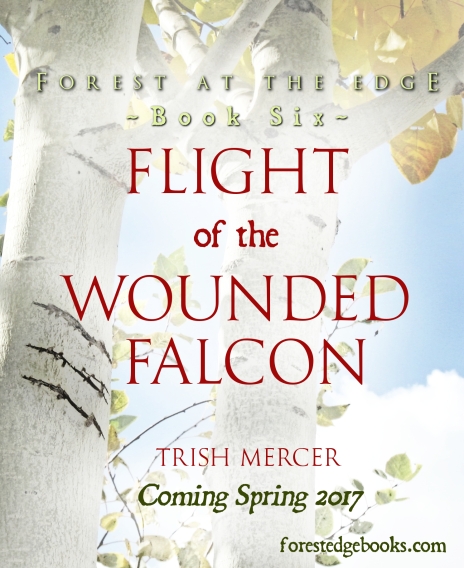 The current plan is to release in May (thus the nebulous “spring”–gives me some wiggle room).

This is the back cover of the book; the front is still in production (ooh, and it’s gonna be good!), but a note on this image: if you’ve read book 5, Safety Assured Leaving East of Medicetti, you’ll recall that Perrin and Peto create a tree-slashing method for marking paths to the ancient temple ruin.

I wanted to make sure this strategy would actually work. So about two and a half years ago, when I was first drafting the series, I went out to my little aspen forest in my front yard and slashed a tree with a knife.

(One of my kids saw me doing it, and he was aghast. “For research,” I explained, and because I sometimes do odd things in the name of research [such as pushing down a dead tree in a burned out forest to see if I could; I could, and it’ll be in book 7] he didn’t ask anything else.)

The slashes on the aspen healed into beautiful, dark lines, as you can see by the photo.

Now, if you should visit my house and can’t find your way to my massive blue fifteen-passenger van in the driveway, just consult the aspen and it will tell how many paces in tens, and in what direction, you need to go. (Or get your eyes examined because, seriously, that’s a huge vehicle.)

Teaser lines from Book 6 will be coming at you every week now, and the countdown’s on!

Random thoughts, in no particular order:

#1: Book 6 went out to my beta readers last week, which means it’s well on track to be revised and released by (hopefully) May 2017!

#2: I’m going on a plane Wednesday morning for the first time since 2003, when I had a genuine panic attack upon take-off. So if you hear on the news of anyone melting down on a flight on to Philadelphia, just roll your eyes and say, “Lemme guess . . .”

#3: I sat for six hours at the airport yesterday morning, (I’ve been going there a lot lately) thanks to the inefficiency of the US army, and was fascinated to think of how many people passed by me for the first time, and the only time, on this earth. A man from India repacked his bag next to us and chatted with my son about serving in the military. Some folks on the other side of us were in town from Chicago for the Sundance Film Festival. A snowboard team waited forever to check their boards.

As I watched people parade by–some looking as disoriented as I usually do in the airport, some appearing to be well-traveled experts–I was almost struck with the notion of touching each person (except there were too many TSA agents around), wondering just how far those folks would go, and if our paths might ever cross again.

The lady with the high heel boots and the Yorkie tucked under her arm.
The mom with three kids who each hefted their own bags and followed her obediently.
The grandpa walking arm-in-arm with his teenage grandson who was flying for the first time.
The lady in the bathroom who called her friend in a panic because the car rental agency didn’t want to give her a Ford Mustang because she would be driving through snowy mountain passes, but told her she’d be better off in a Jeep Cherokee, and only after her friend assured her that was an excellent idea did she relent.

Where do they all come from, and where will they all go? Will I ever see any of them again in this life?

I believe that before we were born, we all knew each other intimately. We had hung around together for at least thousands of year, if not eons.

But birth is, as Wordsworth reminds us, “but a sleep and a forgetting,” and every time I’m in such a crowd, I wonder that if we were all allowed to remember what we meant to each other once before, if we wouldn’t stare in astonishment and embrace in excitement.

I can’t help imagine that we wouldn’t hurry past each other, or grow impatient with someone slower ahead who is clearly inept (my apologies already to my fellow travelers on Wednesday), but that we would shriek for joy that finally–FINALLY!–we found each other again.

Occasionally I’ve experienced, when I first meet someone, a flare of recognition, a heart-leap of, “There you are!” I know that person, already, and am getting the opportunity to know them again on earth. But that’s happened for me only a handful of times.

The rest of the time, we barely make eye contact as we hurry from one place to another, engaged with one important task or another. Maybe we exchange a friendly smile as we negotiate a line, and we’ll sit next to each other on the plane oblivious to the notion that perhaps this was once one of our greatest friends, and will be once again after we “wake up and remember.”

And that’s the best part: I’m confident that in the next life we all will recognize each other again, and trade notes about where we were and when in our mortal experiences, and discover that once, our paths did cross in a busy airport on a bleak day in January.

But something burned in Perrin’s heart. It caught him so much by surprise that he almost gasped. He took the boy’s face in his hands, because something was so familiar about that moment, about that face . . . He had seen this before.