They terrify me. They kill, indiscriminately, even in the hands of the most skilled and trained users.

I hate their shape, their noise, and the smell of the cleaning agents.

My neighborhood is filled with gun-lovers. Hunters, cops, concealed-weapon holders—I’m surrounded by them. I wish I knew who stored loaded handguns in their houses, because I wouldn’t let my kids play there. All of that frightens me, to no end.

Many of my extended family are gun-nuts. They own arsenals. They’re gunsmiths. Bullets are stockpiled as plentifully as toilet paper is stock piled in my house.

Even my husband owns guns. I require that they remain dismantled, and stored in various parts of the house, because I hate them.

There are far too many accidental shootings and deaths. I don’t want anyone to come running to my aid, wielding a firearm, because I fear they’d shoot an innocent bystander in my behalf.

I’ve never shot a gun, but all of my kids have. My son is in the military, and two of his brothers intend to follow him. I’ve handled our family guns a couple of times, only by wrapping an old towel around them. I distrust weapons of all kinds.

You may choose to be offended by this, but I also tend to distrust gun enthusiasts. Some strike me as insecure bullies, hiding behind their weapons in a childish display of bravado and strength. Look at me! Look at the size of my caliber! There’s definitely something Freudian, and something cowardly, about those who feel their many guns give them power.

I’m a bit of a pacifist, if you hadn’t noticed. I crave peace.

I’m struck by the calm countenances I see in those who eschew violence: Ghandi, the Dalai Lama, and many others who would rather take a hit rather than deliver one. My father, who taught me to hate guns, was the most peaceful man I ever knew.

Yet, there’s something that terrifies me even more than guns: those who want to disarm my family and neighbors, while still remaining armed themselves.

I prefer “The Office’s” version of a Mexican standoff: no guns.

It’s the clichéd Mexican standoff: no one dares to drop their weapon, because it’ll leave them vulnerable. I have to confess, those are the scenes in movies I hate the most. I can’t see any peaceful resolution, and you just know someone’s gonna get hit, probably when they’re walking away.

It’s that hypocrisy that makes me nervous.

It’s the same hypocrisy that I see in the elite of America: those with the money and the power and the influence. Those who make laws and entertainment and products we don’t think we can live without.

Those who are trying, at all costs, to take away from us so that they can have more.

You know who I’m talking about, so I won’t name names, but here’s a brief rundown of what they do:

A hypocrite is the kind of politician who would cut down a redwood tree, then mount the stump and make a speech for conservation. ~Adelai E. Stevensen

It’s the same pattern we’ve seen in history, time and time again. America may not have an aristocracy like there was in the French Revolution, but . . . No, wait. We do. They’re based in Hollywood and Washington, D.C.

How difficult it is to avoid having a special standard for oneself. ~C. S. Lewis

These are very dangerous, very powerful people. For many years I’ve tried to give them the benefit of the doubt. So often I’ve defended those who want more gun restriction and laws, not because I agree with their politics (I don’t, at all) but because I sincerely believe that peace can’t happen when so many options for violence surround us.

I thought the elite of America felt that way as well.

But they duped me.

A hypocrite despises those whom he deceives, but has no respect for himself. He would make a dupe of himself too, if he could. ~William Hazlitt

They’re not interested in peace, for everyone. They’re interested only in control, for themselves. You can’t achieve that control if those below you are afforded any power.

My very peaceful father grew up during WWII, in very violent Nazi Germany. His father, a civilian, went nowhere without his sidearm (contrary to popular memes, Hitler did not disarm all of Germany; only the Jews). My parents, both later citizens of America, frequently commented how naive Americans were, how overly trusting we are of those in power, and how little we understand of the horrors of a totalitarian regime.

“This is what politics is about, right? We help the people discover the threat to their security, then we provide them with a solution. Granted, we create the threat that sends them scurrying to us for help . . .” ~Book 4: The Falcon in the Barn

This is why, no matter how much I personally hate guns, I reluctantly, begrudgingly, miserably agree that taking away all of the guns out of the hands of the public will be more disastrous than the bouts of violence we have now.

“Politicians care only about two kinds of people: those who bring them wealth and power, and those who threaten to take it away.” ~Book 3: The Mansions of Idumea 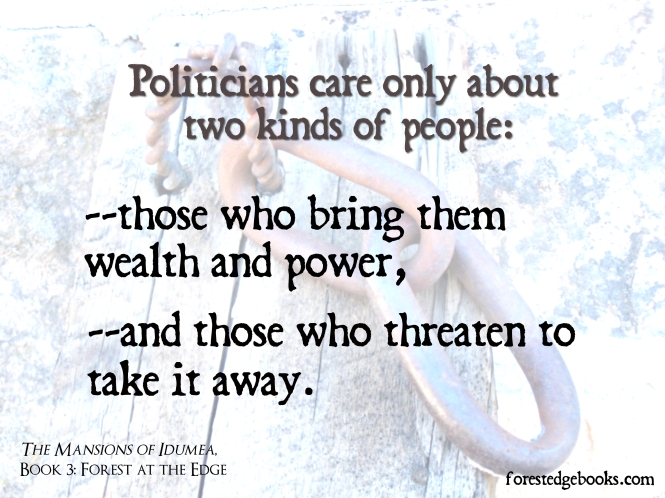 To the elite of America, I promise that this lowly, inconsequential, middle-aged mother of nine who will never willingly touch a firearm will, once again, support your calls for increased gun legislation and even disarmament, on one condition:

Put down your guns first.

But we all know that’s not going to happen.

Now, if you’ll excuse me, I’ll do what I usually do during a scene of a Mexican standoff: run to my bedroom and hide in the closet until it’s all over.

I’ll likely be there for a very long time.

(~Book 5, Safety Assured Leaving East of Medicetti, is now available at Amazon and Smashwords and here. )