Recently a mother of an autistic son in the Salt Lake Valley found the following stickers on her car around her Autistic Child sign:

Love the random capitalization on the stickers. Hey, let’s make this letter big, just for fun!

What caught my eye, however, was this sticker. Exactly what’s this supposed to mean?

It means that the perpetrator is embarrassingly ignorant, on many levels.
Ignorant of autism.
Ignorant of appropriate behavior. (Stickering someone’s car? Really? That may be considered vandalism unless it’s a wedding.)
Ignorant of the English language.

There are marvelous and cringe-worthy examples of ignorance everywhere. A few samples I gleaned from the Internet:

I guess “euthanasia” was too hard to spell?

What we call “irony.” 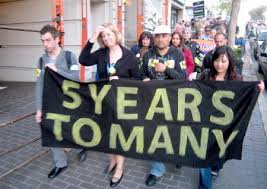 So they’re hoping for many years of the same thing? 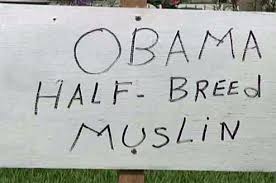 Strange, I haven’t seen “half-breed muslin” at my fabric store. (And does it look like that “d” was an afterthought?)

I’m trying to decide what causes such public ignorance. Does passion for the movement cause one to forget how to punctuate, or even spell?

Or does one protest because they are ignorant?

Of course, ignorance isn’t confined merely to those who protest, nor are all protestors ignorant. Some actually know what they’re talking about.

But some people, it seems, never know what they’re talking about. Back in the 1980s we were newlyweds, and my husband whisked me back to “the east.” I was worried, because I had this ignorant notion that all east coast people were sophisticated, smart, and sharp. I, however, was just a little doofus from the west. How would I ever communicate?

Then I met a young man who asked what my maiden name was. When I told him Strebel, and that my parents were immigrants from Germany after WWII, he developed this odd smirk and said, “So your family were Nazis?”

I was shocked.
Worse than that, I was livid! The Nazis had ruined my families’ lives. My ancestors fought the Nazis!

I started explain that, but the young man just waved me off and said, “Yeah, you’re all Nazis.”

My new husband pulled me away, knowing there was no reasoning with ignorance.

Look at her face. This is not a happy woman. Probably because she’s outraged that she doesn’t know what “you’re” means.

I’ve thought frequently about that incident over the years, and subsequent others. Back in the 1980s when I was working at a trendy clothing shop on the “sophisticated” east coast, one of my coworkers, upon learning I was LDS (a Mormon), said, “Oh, my dad said your husband can have all the wives he wants, that you belong to a cult, and that you drive horses. How come they let you out to work here?”

Oh, where to start! After an hour’s discussion trying to dispell all of that, she still regarded me suspiciously. She knew the truth, or at least liked her ignorance more than she liked my explanations.

Sounds like hell will be pretty full. I know Mormons like me are doomed, but sports nuts are damnable? I was ignorant of that.

Finding the truth was harder 25+ years ago. We didn’t have the Internet. We had to make some effort to visit libraries, read newspapers, or watch the TV news or a documentary. (Really, I’m not trying to sound sarcastic here.)

But today there’s no excuse for ignorance. We have so many resources about anything and everything, and all for free.

And maybe that’s the problem: for every drop of credible information out there, you can find a flood of rumor and nonsense. There are no fact finders on meme generators, our society’s new bumper stickers of truth. Anyone can create anything, and those who “think” they know won’t bother to research the truth.

Actually, these pyramids were built by paid workers, and by farmers and villagers who volunteered during the off season believing that their labor would help ensure their own afterlife. No slaves were harmed in the building of these pyramids. http://www.pbs.org/wgbh/nova/ancient/who-built-the-pyramids.html

I’ve discovered something about the ignorant: they’re afraid.
Afraid they may be wrong.
Afraid they won’t recognize the truth when they see it.
Afraid to change their attitudes.
Afraid to be humble.

Back to my “You’re all Nazis” man. The more I learned about him, the more I realized he was truly ignorant.

He didn’t read, which is the hallmark of ignorance. Not the news, not books, not anything more than bumper stickers, which constituted the bulk of his education.

His little smirk was his signal of fear. I’ve seen this odd trait in many scared people. Either they’re lashing out in a full, terrifying rage, or they’re trying to pretend they’re more confident than they are, hence the smirk. Watch for that, the next time you’re confronted with someone who’s particularly unpleasant. You’ll see their terror cowering behind the smirk.

I feel badly for these people, I really do. There’s no need to be fearful, there’s no reason to remain in ignorance. There’s such a wealth of information in the world, and many good, kind people who would be willing to share what they know with you.

But that takes humility: recognizing that we don’t know everything, and that we still have much to learn.

I may be a “mavrik” if I knew what it was. Perhaps you could also explain what a “socialest” is?