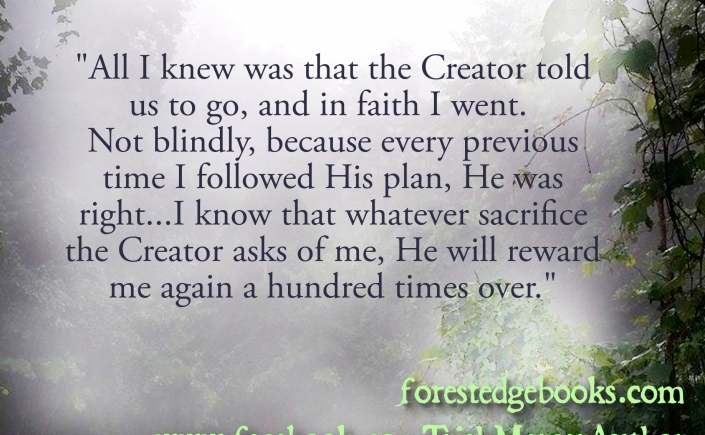 My past forests have been pathetic. In 2015 when we lived in Utah,  I wanted a real forest  even though we lived in a desert. I was in the middle of writing this series and it seemed wrong that I didn’t have a real Forest at the Edge of my yard. 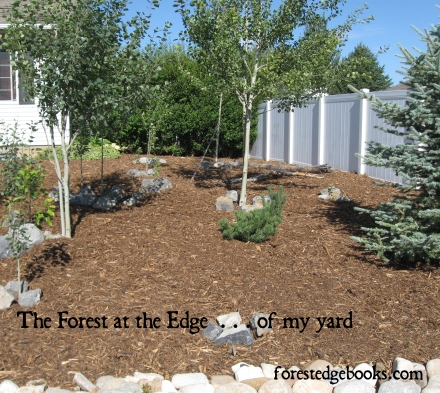 This was it–our “huge” forest. (And the pine tree died the next year. Typical.)

So we created one that summer in the name of xeriscaping, and I documented it in a blog. I even slashed an aspen to see how the markings the Shins left in the forests might look, and I used that tree as the teaser for Book 6. 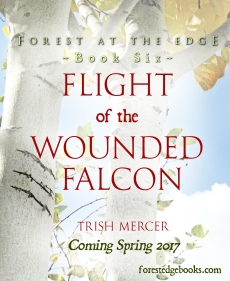 See the lovely scars of black under the W?

Only two short years later I sold that house and mourned the loss of my little forest.

I didn’t realize that God would compensate my sacrifice, and in a grand manner. Now, this is the Forest at the Edge of My Yard in Maine: 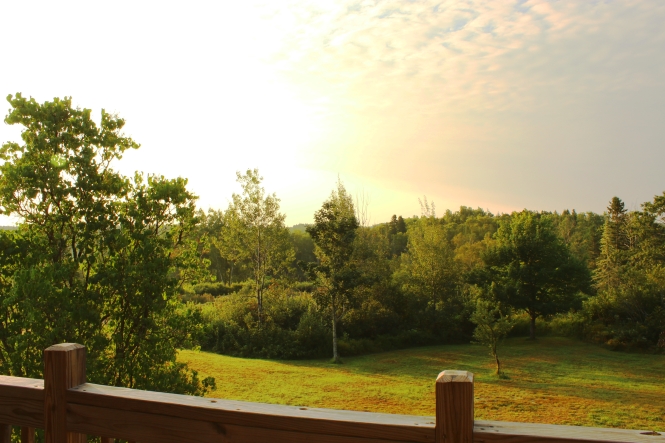 (Morning from the back porch.) 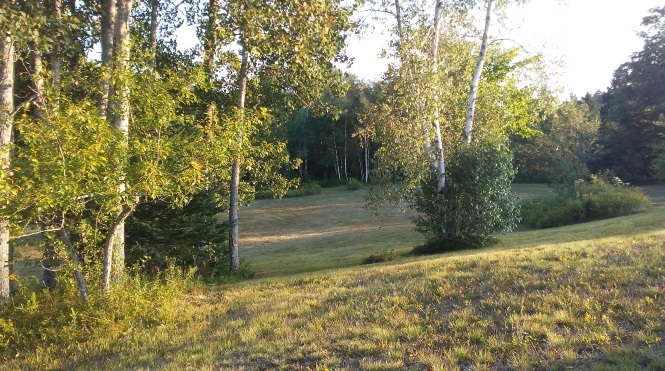 (Sunset on aspens slightly larger than what I had in Utah.)

This compared to what I left behind last year? There’s no comparison.

We don’t own this land, but my husband’s job allows us to live here and wander in acres of old forests. I just need a geyser somewhere to make my life complete.

I write this as a witness to you that whatever God asks you to sacrifice, it will be only temporary. We’ve left homes we’ve built, we’ve said good-bye to friends and family, we’ve given up jobs and dreams.

In fact, if we hadn’t sacrificed what we thought was good, we never would have been granted what was far better.

But first we had to be willing to give up what we didn’t want to, without knowing what might come later.

That’s immensely difficult: to have enough faith in a different future to walk away from a good present; to find enough hope to believe that what comes next will be worth the current loss. But as someone who has “given up” a few houses, a couple of careers, a lot of friends (but thanks to Facebook they’re not entirely gone), and some big dreams, I have seen–time and time again–that what I’m eventually given in return was well worth the sacrifice. 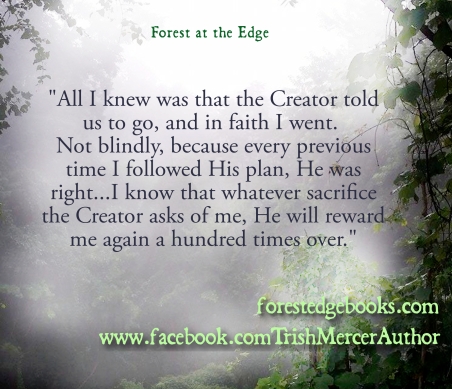 In fact, all of our sacrifices have turned out not to be sacrifices at all, but instead were the means to leading us to far richer lives.

“I won’t do it!” said another man in the crowd. “I won’t leave behind everything we’ve worked so hard to build. And not just for me, but for my congregation, my family, my neighbors—I can’t just abandon all that we have.”

A man in the middle shouted, “Why not? Do you have any idea how hard it is to start again?”

“As a matter of fact, I do!” Mahrree told him, and nearly grinned as she realized how perfectly the Creator had prepared her for this moment. “I know exactly what it’s like to leave a home I love, to leave books that I considered my closest friends, to say good-bye to memories, possessions, the graves of all those I loved, and to have nothing more than the clothing on my back to walk to a future that I knew nothing about.”

The crowd was silent as she continued. They’d heard her story before in her class, but not told quite like this. Today, it was more than just history.

“Twenty-seven years ago I came to Salem, nervous and at times terrified as to what I would find. All I knew was that the Creator told us to go, and in faith I went. Not blindly, because every previous time I followed His plan, He was right.

“I ran through the forest in the darkest night I’ve ever seen, with hazards on either side, the army right behind me, and a lightning storm before me. But I came out of it safely and my faith stronger than ever. And then I came to Salem, which was a far greater life than I could’ve ever imagined. Now, none of that would have happened if I had said to the Creator, ‘No thanks—I think I’ll just handle the army on my own.’ I realize you’re worried, but staying here and fighting is far more terrifying than trusting in the Creator!

“Soon I’ll be making that journey again,” Mahrree’s voice threatened to quaver but she held it strong. “But I know that whatever sacrifice the Creator asks of me, He will reward me again a hundred times over.

“So what if you lose your homes? Your flocks and property which you don’t even own? Isn’t the risk of losing your souls worse? There’s a saying in the world: It doesn’t matter how you begin the race but how you end it. How tragic it’d be if you’ve spent your entire lives living as the Creator wanted you to, then now, at the very end of the race, you jump off the path and ignore all that you’ve been taught? Why fail the Plan now?”

Mahrree knew she was saying the right things. Her chest burned and she felt such energy she could have flown right off the small tower. She watched their eyes as she spoke. So many were hardened and impenetrable, but others’ eyes were softening.

“How can it NOT be it?” Mahrree shouted, throwing her hands in the air. “Have all of you missed the signs? Land tremors! Deceit awakened! Famine in the world! Now the army marching upon the Creator’s chosen? THIS IS IT, PEOPLE!”

~Book 8, The Last Day, available HERE on Amazon, or HERE as a pdf. download, or HERE on Smashwords. 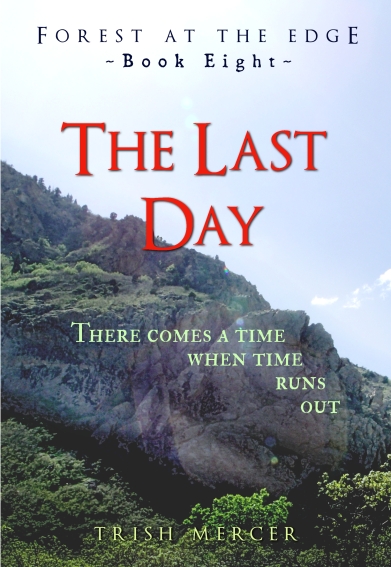 2 thoughts on “The Forest at the Edge of My Yard (or, whatever you’re asked to sacrifice will eventually be no sacrifice at all)”