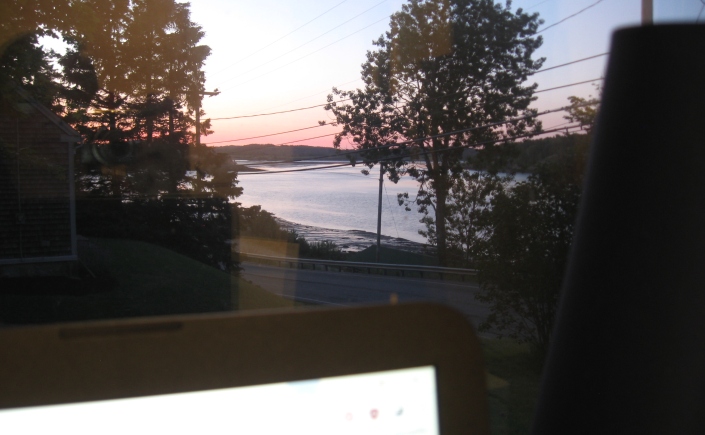 “Since I don’t have a linen closet–or any closets for that matter–just stick that in my bedroom.”

“Did I say garage? I meant the cellar. No! BATHROOM!”

And that sums up all the sentences that have come out of my mouth since Saturday at 5:30 p.m. when we finally cruised into Machiasport, Maine.

I didn’t feel I could sit down and update this blog until the house was in somewhat sort of livable condition, and since it’s about 150 years old, and my kids are used to clean, updated, new-paint-and-flooring houses, they’re dying in this rental which they claim will NEVER be livable because the wood floors are older than any structure west of Nebraska and the smell of “old damp” permeates everything, and their idea of “charming” is not the same as the local definition (but Mainers say it’s a FANTASTIC house so my kids are getting nervous) . . . where did I begin this sentence? Yeah, it’s been nonstop for the past two days.

(And yes, my washer and dryer are in the very big bathroom because it was originally a bedroom because this house was built LONG before indoor plumbing, so a claw-foot tub is smack-dab in the middle of the room, a shower is in one corner, the washer and dryer are in another corner, and the toilet stands at the head of it all like a throne in a plumbing castle. The door opens to smack it so you need to brace yourself in case someone barges in since the lock is also over a hundred years old and we’re all terrified to lock it because we might not ever get out again.)

So we left Concord, NH Saturday morning (I was about to take pictures of all the New Hampshire license plates, since it’s rare that you see those, until my 20-year-old reminded me that we’re not in the west anymore but were, in actuality, in New Hampshire) and we made decent progress until we realized it was a sunny weekend in summer and everyone was going to the beach. 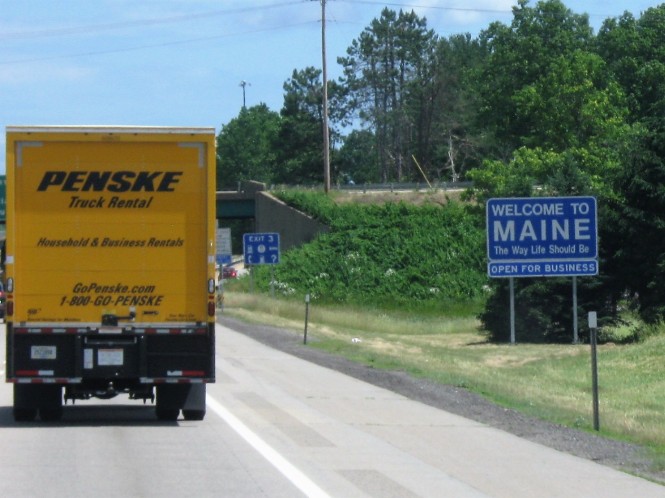 And I thought, “The snacks lasted! We didn’t run out of drinks! There are still toys to play with! We made it!”

And then about an hour later my 18-year-old reported that the inside of the minivan was dripping water on her foot, and we decided the AC didn’t know how to respond to humidity and we were NOT about stop anymore, so we kept on for three more hours until we saw . . . 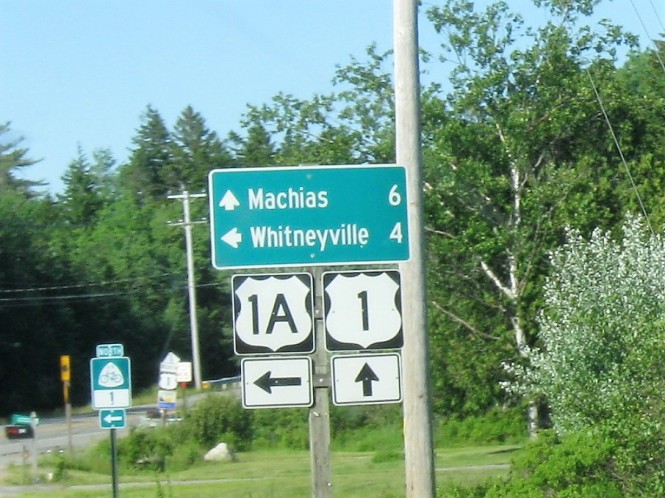 “Hey kids–do you know they grow blueberries here? The small ones and the big ones?”

Over the radio I heard, “Mom and Dad, where have you brought us? Is that seriously an all-blue tourist trap?” Yes, so was the Ford dealership (and also the cake someone delivered for us: blueberry and cinnamon, which didn’t last long at all).

That’s when I started speaking only in the five lines listed above. Our branch of the church sent out the call and for the next hour and a half I was in the truck handing out boxes and bins and saying all the wrong words because sea-level makes me dizzy (seriously–happens every time I descend from my mountains, but it wears off in about three or four swirling days). Then suddenly the truck was empty, generous families filled our fridge with pulled pork and baked ziti and noodle-meatball-bbq sauce casserole, and I stared out at the fields of wild lupines everywhere (photos to come) and I wondered just what had happened.

Well, first, there was an explosion of boxes in our house which still hasn’t been cleared but should be gone in another day or two.

Second, I discovered that morning comes VERY early here in the Sunrise County, meaning that the sun was pouring into my east-facing windows, reflecting off the water so that I was facing the brightness of TWO suns and I thought, “Well the sun’s pretty high already, time to get up to keep unpacking some more,” until I looked at the time and realized that the sun rises on the coast at FOUR-FREAKING-THIRTY A.M.!!! Yes, that 4:30 A.M! What is this, Alaska?

My husband brought home two dark gray flannel blankets that we’ve safety-pinned up as curtains for our bedroom.

Third, I discovered that the sun sets a bit earlier than I am used to, but that I have a pretty cool view out of my bedroom window. Here’s how it looked tonight at 8:30 p.m.: 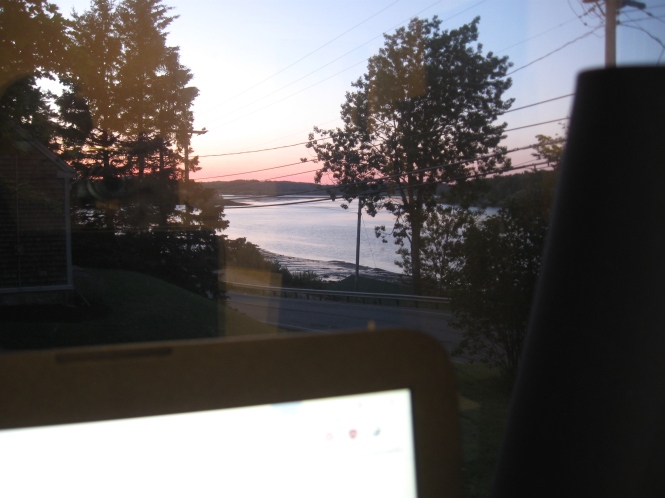 That’s my laptop on the bottom left, and that’s the sun setting on the tidal inlet, right in front of me.

Fourth, I’m slowly discovered what Maine life means–a little slower, more laid-back, less concerned about appearances, more honest and sincere (all of those are lovely, lovely things, as is the very British accent of my new neighbor) and the local McDonald’s has a different menu:

We also learned that the very first naval battle in the Revolutionary War launched just a couple hundred feet from our rental house. It’s not quite as impressive as it sounds (a couple ships, a few shots fired), but there’s a whole building two down dedicated to its memory, and we’ll take that distinction.

This evening we took a break from two days of unpacking and trying to construct IKEA furniture, and headed down to Roque Bluffs to see the water, find a few shells, freak out our youngest son who we realized is terrified of the ocean (but went to it after bribes from his brothers for popcorn and Plants vs. Zombies), and to begin to take in where we now live. 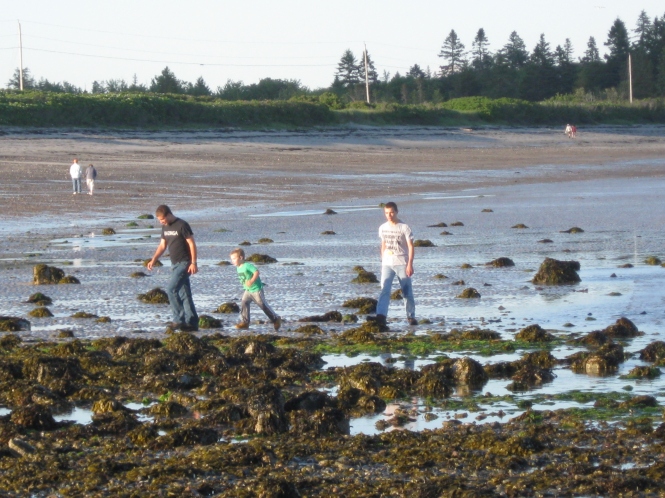 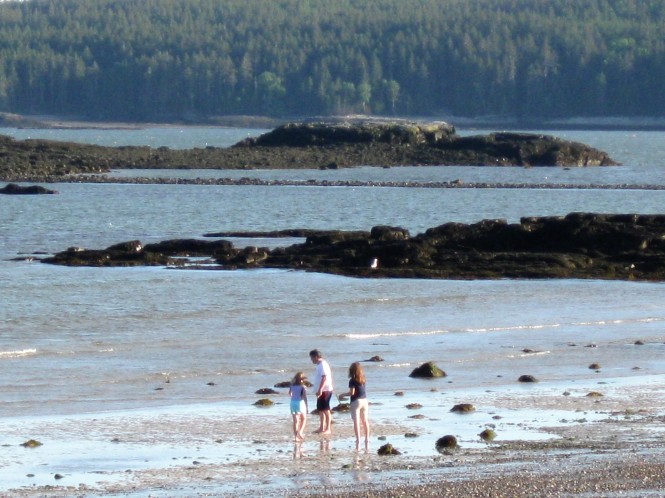 This morning I looked outside as the tide was coming in, noticed some critters leaving a wake, and knowing that seals frequently go up and back with the tide, took my bowl of cereal outside to eat and watch the water when the sun was where it normally would be at noon but it was barely 9 a.m. My life is very, very different now than I’d ever thought it would be, and while I’m utterly exhausted and thoroughly grateful our trip has ended without major incident and that all of us are here and slowly, slowly settling in, I think it’s going to be just fine.

Then I discovered that the old wooden Adirondack chair I was sitting in was giving me a splinter in my behind, and my up-far-too-early brain concluded that this moment–gazing out on an unusual and beautiful scenery with soggy cereal and a sliver in my butt–pretty much summed up life.

And that I really, desperately, need to catch up on sleep. Good night.

(Addendum–I was about to hit publish when my 5-year-old came in for his good-night kiss. I took him to his room, showed him that while he was playing I put together his bed, set up his toy bins under it, and put his four favorite pillows around the top. He squealed in delight and said, “Thanks, Mom! That’s all I wanted! You’re the best!” I’ll take that.)

8 thoughts on “Move: Day 6+ From Utahns to Maine-iacs”