My 17-year-old daughter has been awarded an academic scholarship to the university she’s attending this fall.

But she wasn’t mentioned in the assembly the high school held last week honoring scholarship recipients.

She’s leaving high school with a 3.9 GPA, but she won’t receive any honors.

She quietly walked away from school yesterday, and didn’t even attend graduation (she was working at Little Caesar’s to earn money for housing in September).

Because she’s not a senior in high school; she’s only a junior. And, like her two older sisters, she’s decided she’s done with the drama and tension of high school life. She’s skipping her senior year and heading straight for college.

Without a high school diploma, without even a GED.

And I love seeing the look of shock on the faces of our friends and neighbors when they hear that I now have five—FIVE—high school dropouts.

Not a single university of the four that my kids have applied to has asked for a high school diploma. None of them.

“But . . . but . . .  they need transcripts showing they completed four years of schooling! How do you get around that?”

Easily. Our kids are part home-schooled, part public-schooled. I make transcripts for my children based on what they’ve studied since 9th grade, couple that with the grades they get from their high school courses, and send that to the universities. The admissions offices accept the documents, no questions.

Teaching my kids at home? Recording their scores? Nope. And there’s nothing illegal about dropping out of school.

That test is designed to demonstrate how well a student may succeed in college. Four of my five kids scored in the high 20s and low 30s on their ACTs, and that was good enough for college. One child, who has struggled with some learning disabilities, didn’t score as well, but he’s been accepted to two state schools anyway.

Because college isn’t that hard to get into.

Every state has university systems with “open enrollment.” Essentially it means that if you have a heartbeat and a bank account, you can try a year of college. Having taught at these schools, I realized that this prevailing notion is a good one: maybe someone wasn’t top of his class in high school, but maturity, focus, and time works in favor for a lot of people. Just give them a shot at college. If they don’t succeed after a year, they’re put on probation, but most likely drop out on their own to pursue something else.

Several years ago, my oldest daughter scored the magic number on her ACT to be accepted into Brigham Young University in Provo, Utah. She had taken the test early as a 15-year-old, only so that we could gauge where her homeschooling had taken her.

I stared in shock at her score, then was surprised even more when she said, “Can’t I just go to college now? What’s the point of doing more high school?”

I had no answer for her except, “I guess you could go early . . .” She started her freshman year of college when she should have been at her senior year of high school.

My second daughter, not to be outdone by her sister in anything ever, also took the ACT early, and to her delight scored one point higher. She was attending our local high school part-time, and when her guidance counselor brought her in to choose courses for the next year, she told her, “I’m not coming back; I’m heading to college instead.”

The guidance counselor called me that day. “I don’t think that’s a good idea for your daughter to skip her final year. Most kids aren’t mature enough to move away to college at 17. Most kids really struggle.”

I answered, “Most kids aren’t my kids. I evaluate each individually, and my daughter is ready to leave, just as her older sister, who has a 4.0 at BYU right now.”

Where are my two daughters now? My oldest is completing her master’s degree in archaeology. She’s been published a few times, was the head TA for anthropology for many years, directing 20+ TAs who taught freshman anthropology, and is completing her thesis, despite having a toddler at home and another baby on the way. 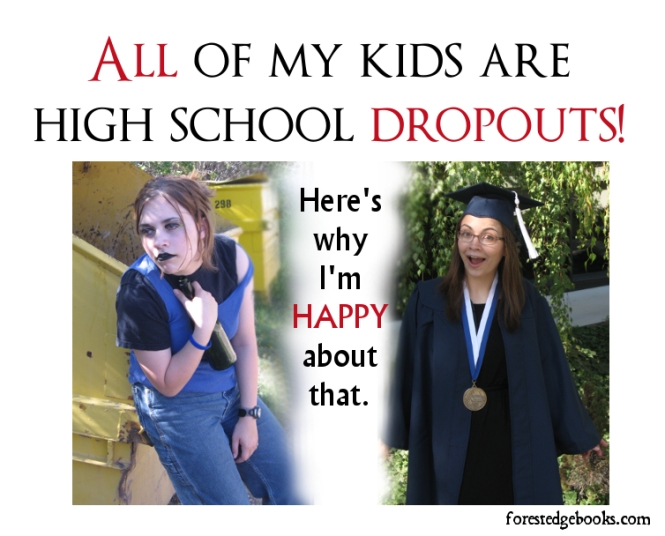 As my oldest daughter, Madison, received announcements of high school graduations, complete with dramatic photos, we decided to do our own photo shoot of her dropping out. (She’s holding a root beer bottle, by the way). Four years later she graduated as valedictorian of her class at BYU-Provo. Now she’s married, a mom, and finishing her master’s thesis. Not bad for a “dropout.”

My second daughter earned her associates’ degree with a 3.95, went on an LDS mission to Edmonton, Canada for eighteen months, and now is finishing her first year at BYU’s very competitive nursing program. She hopes to become a labor-and-delivery nurse, and eventually a certified midwife.

I think they were mature enough to leave high school, just as their little sister is.

I have two sons who also dropped out, but they went through their senior years. Almost.

My oldest son, who has learning disabilities and struggled like his dad to learn to read and write, took schooling slower and finished his high school courses with a 3.8 GPA. Seeing him earn As in English astonished me. Then he quit school, without a diploma.

Then he went to the oil fields of North Dakota.

Then he went on a LDS mission to Pittsburgh, PA for two years.

Then he went into the army reserves and trained in petroleum testing, where he was honored for earning the highest scores.

And now he’s going to college. He’s starting later than most freshmen, but with a wealth of maturity and experience behind him, and with eagerness that a lot of college freshmen, who are burned out from high school, don’t possess.

I’ve had a few acquaintances surprised by this, too.

No. He’s only 22. I used to teach evening courses at a community college where half of my students were older than me. It’s never too late to start.

So what? We’ve been programmed by our many years of public schooling to think that everyone should be the same age in the same grade. But once you get to college, you realize that your classes–if you’re lucky–are populated by a microcosm of the world: people of all ages and backgrounds and even countries.

My son’s starting college in a very smart way: with no debt. He knows he’s not getting scholarships like his sisters, but the army’s helping him pay for school, and he’ll eventually leave with money in the bank, not debts to his name. He’s learned from his parents that student loan debt is a killer.

And what about my other son? He dropped out a little bit early. He left before his third trimester of school. 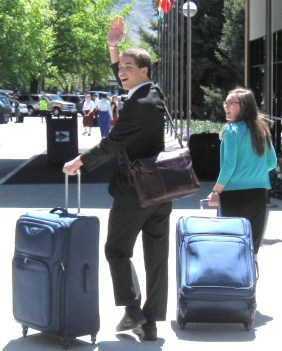 Yep, right in the middle of it all, he waved good-bye and walked away.

He figured, what more could he get out of high school in one more trimester? Nothing, really. He wanted to get to serving as a missionary for the LDS church.

While the LDS church wants its missionaries to complete high school and graduate (the minimum age to serve for boys is 18), I pointed out to our local leadership that none of my kids graduated because they are home-schooled, and my son had been 18 since the beginning of the school year.

Our congregational bishop, a teacher at the high school who had my sons in his classes, scratched his head at my argument. Then, knowing me and our family too well, said, “All right. I guess we can submit his papers and see that the church says.”

By April of his senior year, my son was already serving an LDS mission in Oklahoma City, Oklahoma. He missed all the graduation parties, just like his sister has, but he doesn’t care. He’s already moved on to real life.

I have four more children who will also likely make me proud by being high school dropouts. I’m not proud that they “dropped out,” but that they made decisions for themselves as to what they wanted to do with their lives.

My husband and I haven’t told any of them what we expect of them. I have, however, told them I want them to try at least one year of college, just to see if it’s for them. I want them to have that experience of learning from various people—even the liberally-minded, to help challenge and strengthen our conservative beliefs. When they do that year of college, and where, and how, is entirely up to them.

Back to my latest high school dropout. When she came home from high school for the last time, I asked her, “Any regrets? I heard your friends saying how much they’ll miss you next year, how they wished you’d stay.”

All of my kids do things differently, like making a prom dress skirt out of storm trooper fabric.

Oh, if you could have seen her eyes rolling. Like planets falling out of orbit.

“No!” she declared. “I am done! Let’s get on to real life!” Then she pulled out her tablet, with yet another recipe on it, and headed to the kitchen where she’s been experimenting with meals she can make after a day of college classes.

She’s moving on when she’s ready to, not when some random bureaucrat declares her “mature enough.”

She, like my other children, is making choices for her life, based upon her needs.

I love having a house of rebels.

“Let’s hope there are still a few rebellious ‘teenaged’ souls out there,” Mahrree whispered to Perrin.

(Book 5 is published and available! Get Safety Assured Leaving East of Medicetti at Amazon, Smashwords, or here on “Start reading the books!“)

2 thoughts on “My kids are high school dropouts, and I couldn’t be happier about it”